I get some data during TARC practice.

Today was a beautiful day, albeit somewhat windy. Around 1, Duane, his daughter Katie, and I gathered up some rocket stuff and headed out to the pony farm in Harvest. The owner there often lets us fly on his field, and it is almost perfect for TARC birds. When we arrived, Nate Pahman, teacher par excellence, and his Liberty Middle School kids were already set up and prepping to fly. Members of the John Paul II High School team also showed on the field, so there were TARC birds taking to the skies regularly throughout the afternoon. Due to the wind, the rockets had trouble achieving altitude - 801 feet was the best of the day (825 is the goal). There were also the usual "oops" stuff - kicked motors and a nose cone not secured to the payload section, resulting in eggs falling out of the sky and the loss of the nose cone. A typical TARC practice day…

However, today was different - at least for me. Even though I came armed with my trusty stop watch in the event of a qualification attempt, I had also brought a rocket to fly. Not any rocket, mind you, and not my normal fun flights. Today's flights were serious - I was going to do some science!

Back in 1978, Centuri Engineering (by then in the twilight years of its existence) released a rocket outfit called the Power System, which was designed to grow rocketeers from beginner to advanced, teaching concepts such as clustering and multistaging along the way. It wasn't a bad idea, and of course young adult Bill had to have one, especially when I learned that one of the rockets - the RX-16 - featured interchangeable motor mounts that enabled you to convert the model from single motor to cluster power. My original RX-16 has long departed for rocket heaven, but I was so impressed with the design that I cloned one a few years back. It has 3 interchangeable motor mounts - a single 18 mm, dual 18 mm (just like in the original set), and a 24 mm mount for D/E motors (not in the original set). So, today, when I wanted to do science, I called upon the reliable and versatile RX-16. 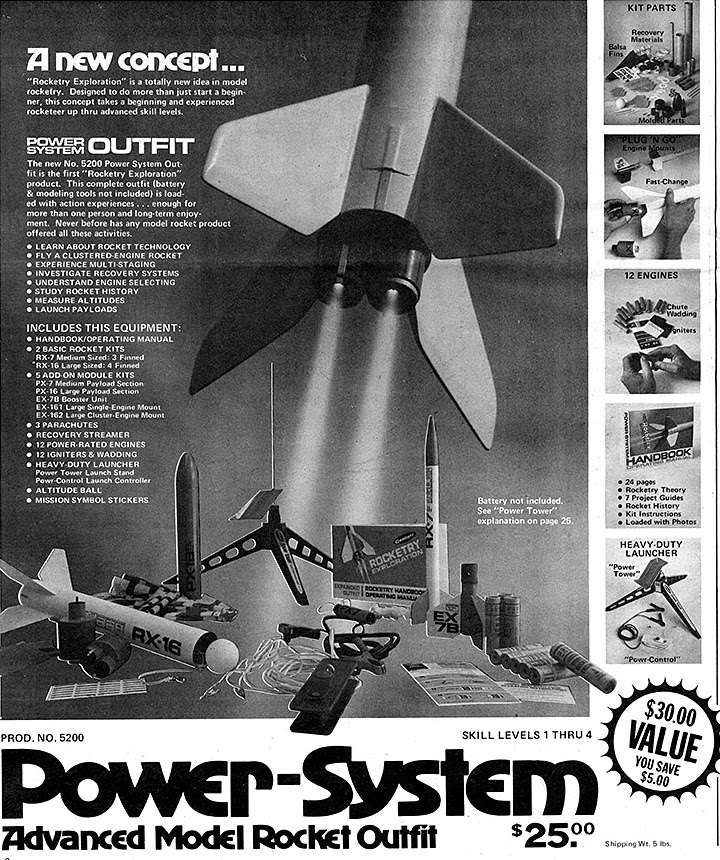 The goal today is related to my previous post - I wanted to chuck something (to be discussed later) out of the RX-16 at ejection, time its fall, and compare the calculated altitude from the fall time to the altitudes reported by two altimeters in the payload section. Why two? Well, one of the altimeters is the Jolly Logic Altimeter II, which measures not only peak altitude, but also ejection altitude (important for my purpose), motor burn time, various coast times, acceleration, max speed, and descent rate. A lot of data to display on a tiny LED screen! The other altimeter, a Perfectflite Alt WD/15K, is much older and now out of production, but is considered the "gold standard" of small rocket altimeters, having been used in TARC competitions for many years. Unlike the Altimeter II, the Perfectflite can upload its flight data - sampled at 0.1 second intervals - to a computer via a USB connection. It rode in the same bay as the Jolly Logic to act as a check on the upstart.

The downside of all this science gizmo stuff is that the additional weight turned the RX-16 into a pig. I used a rocket app on my iPhone to determine that a B6 would have the rocket claw its way to just 80 feet; a C6 was a little better, with altitudes projected around 250 feet. So, I decided to start the day with flights using Estes C6-3 motors. The C's would do nicely, because D's would send the rocket to about 600 feet; there was a wind, and I was paranoid about losing two altimeters, having already lost one to the cursed rocket eating trees near this field several months ago. Seeing $70 in electronics hanging 50 feet above your head is very painful…

Both rocket flights went well, if you discount the fact that both flights landed in the water-soaked grass ditch near the pads. Fortunately, my birds are painted and sealed, so a quick wipe with a tissue removed the mud and crud. The Perfectflite altimeter beeps out the peak altitude on landing, and I entered this bit of data and the information from the Jolly Logic display into my iPhone's Notes app; I am finding it handier than paper and pen to record short amounts of stuff. 4 PM arrived soon after my second flight, at which point everyone packed up and headed home.

Back at the apartment, I wasted no time grabbing the computer interface kit to the Perfectflite altimeter so I could upload the data to my iMac. Soon the neighbors almost surely heard a stream of curses, as I discovered the altimeter software would not work under Mountain Lion, and that there were no updates due to the product being obsolete. However, it would work under Windows 7 - imagine that! I muttered a few more expletives as I hauled my PC laptop out of the closet, plugged it in, and started the 10 minute Microsoft boot process. Once this was completed, I installed the altimeter software and downloaded the data from both flights into the PC. I then transferred the files to a USB stick so I could analyze the flight information on my Mac. The less contact I have with Microsoft, the better.

Here's the flight data from this afternoon, in graphical form (my RX-16 is shown in the upper right corner):

The points are the data from the Perfectflite altimeter; while the horizontal lines indicate the peak altitudes as reported by the Jolly Logic Altimeter II. On the first flight, the agreement was surprisingly close, with the Perfectflite giving a max altitude of 297 feet and the Altimeter II 298 feet. Agreement was not so good on the second flight, with peak altitudes measured at 268 and 277 feet, respectively. Although this looks big, it only amounts to 9 feet, which is about 3% - well within NAR standards.

The dashed lines show fits to the rocket's descent profile as reported by the Perfectflite. According to it, the RX-16 descended at 10.6 mph on the first flight, and 12.0 mph on the second (as is evidenced by the slightly steeper slope). The Altimeter II reported descent speeds of 10 and 11 mph, about 1 mph slower than the Perfectflite. A small difference, but the fact that both speeds were slow is nagging. I will have to make more flights and collect more data to see if this trend persists or if it is simply an artifact of having only two flights.