Team America Rocketry Challenge (TARC) pits teams of middle and high school age kids across the country in a contest to be the best in achieving a specific challenge involving mid-power rockets. This year, the challenge is to fly 2 raw Grade A hen's eggs to 825 feet and land them safely - not even cracked - on the ground 48 to 50 seconds after the rocket leaves the pad. It's a pretty tough goal, but we have 9 registered teams in the Huntsville/Madison area who are striving to be one of the top 100 teams who will fly at the national finals in northern Virginia in May. The prizes consist of thousands of dollars to the winning teams and their schools, and a trip to an international airshow (Paris or Farnborough) for the numero uno team. Number 1 will also represent the good ole USA in a match against the champions from other countries who have similar contests.

Today I received an email from club member Duane, who is the mentor (according to the team, his title is actually "benevolent dictator") of the Falcon Rocketeers, which is a TARC group of kids from various schools in the area. They were going to take advantage of today's fine weather to make their first qualification flight (teams are allowed 3; the best two scores are summed to determine which teams make the nationals), and wanted to know if I would be the NAR observer for today's attempt. I responded affirmatively, and 3 PM found me and Duane meeting up with the team at the field next to McDonnell Elementary in Huntsville. The sun was shining, the winds were moderate, and the temperature was in the comfortable 50's - a good day to fly! 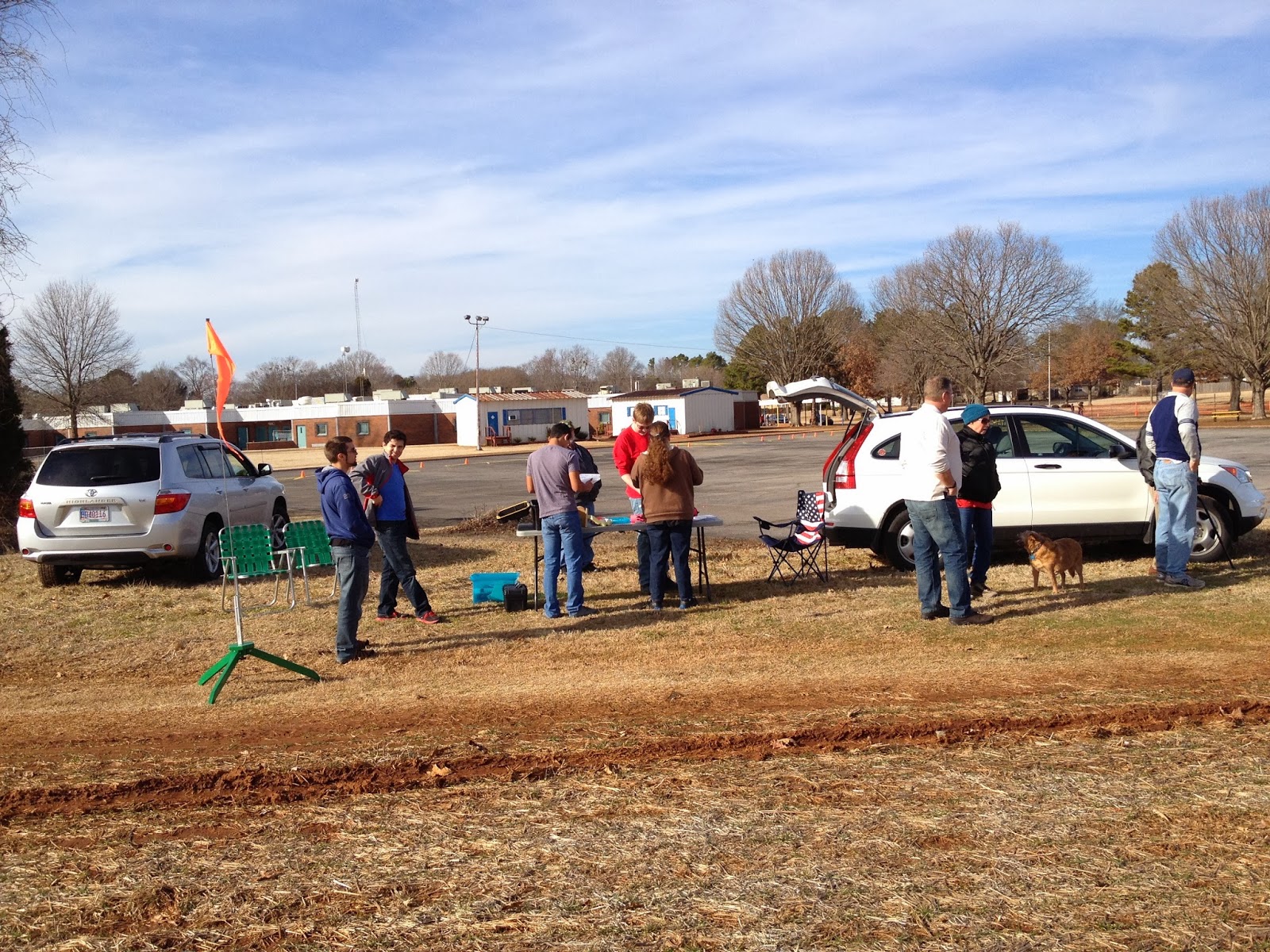 The Falcon Rocketeers have two TARC rockets ready for flight. The primary entry is a stubby BT-80 pink rocket with unusual forward swept fins they call "Pink Floyd". The backup rocket is the same design, but slightly heavier and with a green paint job, hence the name "Green Hornet". The rocketeer in me is pleased that the team has given their birds names and personalities rather than simple "TARC rocket 1" and "TARC rocket 2". It would be much better to go to nationals with Pink Floyd than a nondescript number, don't you think? As it turned out, Pink Floyd saw all the action today, while Green Hornet lay patiently in the car. I hope he will fly at a later date - such creativity must be allowed to take to the air.

The first flight of the day was not a TARC flight, but was turned in by a nicely painted Estes Alpha on a C6-5. Belonging to one of the team members, it achieved a height well beyond that capable of landing in the modest field and thus drifted deep into the line of rocket eating trees to the east. A shame, but I had a feeling. One of my fundamental axioms of rocketry is that the odds of losing or damaging a rocket are directly proportional to how nice it looks. This one was nice indeed, so I figured - but hoped otherwise - that it was doomed.

The Falcon Rocketeers launched Pink Floyd on a test flight, in which he achieved an altitude of 803 feet and a duration of 50.3 seconds - a 23 score. TARC is scored like golf - a perfect score is a zero, meaning your rocket hit the altitude and duration marks (825 feet, 48-50 seconds) exactly. So the higher the score, the worse you did. A 23 is pretty respectable for the first flight of the day, and so the team decided to go for broke and attempt a qualification flight. Pink Floyd was once again readied for flight and placed on the pad. Before leaving the pad, the team clasped hands in a small circle around the rocket and had a short prayer. I watched in approval - in TARC, you need all the help you can get! 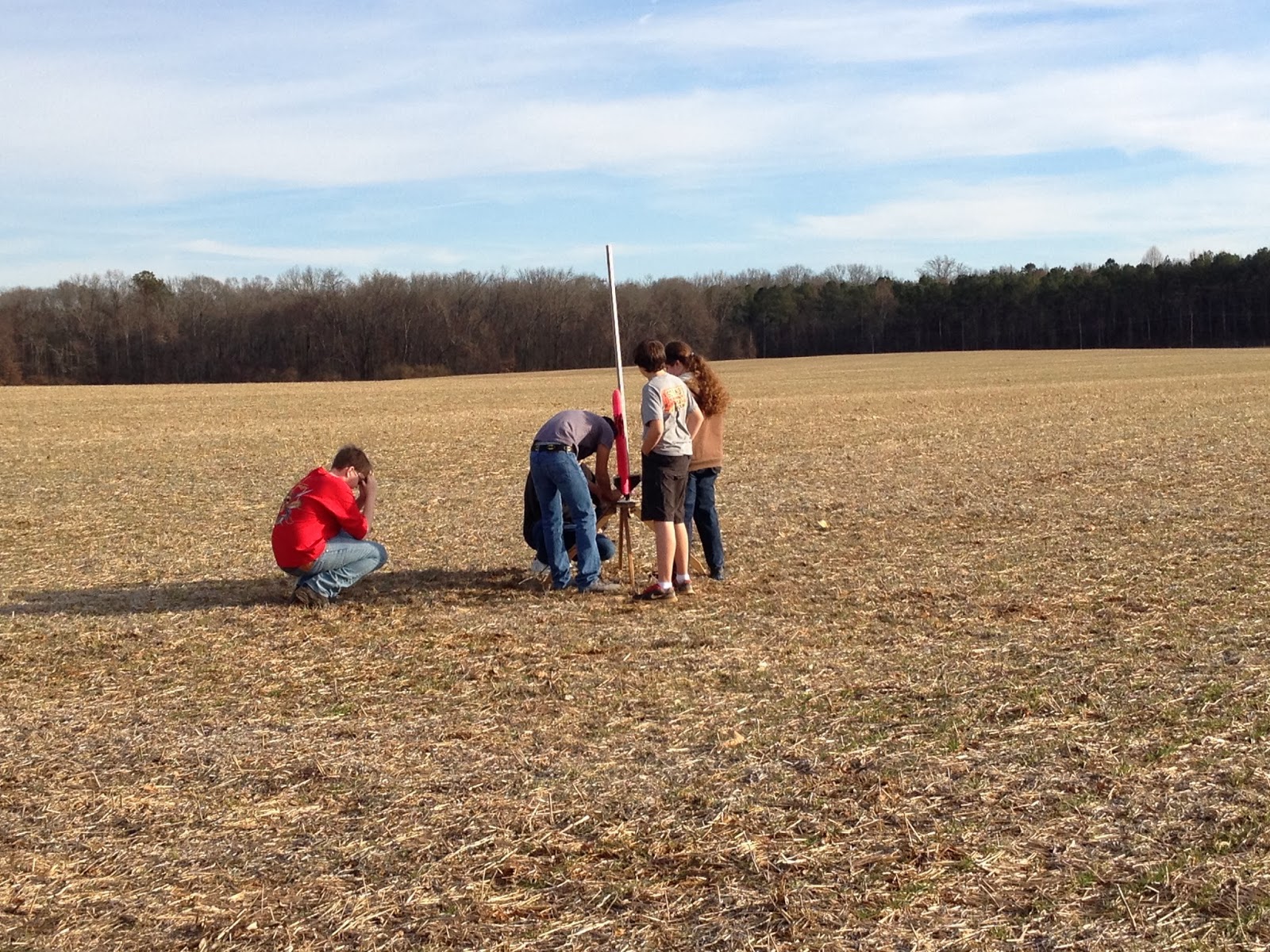 Pink Floyd did not disappoint his team - he rose to an altitude of 815 feet and landed in 49.995 seconds for an outstanding 10 score. The young lady team member's hands were shaking as she removed the eggs from the rocket; even one cracked egg would result in a disqualification, rendering the score moot. After a careful examination, I pronounced the eggs intact, and cheers erupted. Qualification attempt 1 was a success, and the Falcon Rocketeers had one very good score to send into TARC headquarters!

The day had been kind so far, and the team decided to build upon the momentum and attempt a second qualification flight. Pink Floyd was readied again (I was beginning to feel sorry for the Green Hornet over in the SUV) and placed on the pad. The prayer circle was repeated, a countdown was given, and Pink Floyd once again took to the air. Up, up, up he went… then the seconds ticked away as we waited for the chutes to be ejected… 2 orange parachutes out and open - yay! Hold it… what's that? Something is falling with no chute!

Something was indeed falling - the heat from numerous ejection charges had weakened Pink Floyd's nylon shock cord, which finally broke under the stress of parachute deployment. The sustainer body tube - motor and all - was falling freely, while the egg capsule and altimeter descended safely under the twin chutes. Fortunately, the sustainer fell sideways and so drag slowed its fall just enough that there was no damage upon impact with the ground. However, the TARC rules are very clear - the rocket must descend as one connected unit, and so I was forced to disqualify flight number 2. Very disappointing, but it turns out that perhaps it was for the best. When the eggs were removed, one was significantly cracked, which would have disqualified the flight even if it had been perfect in performance. A sad ending to an otherwise great day, but the Falcon Rocketeers know that they still have one more qualification attempt and are determined that it will be a good one. 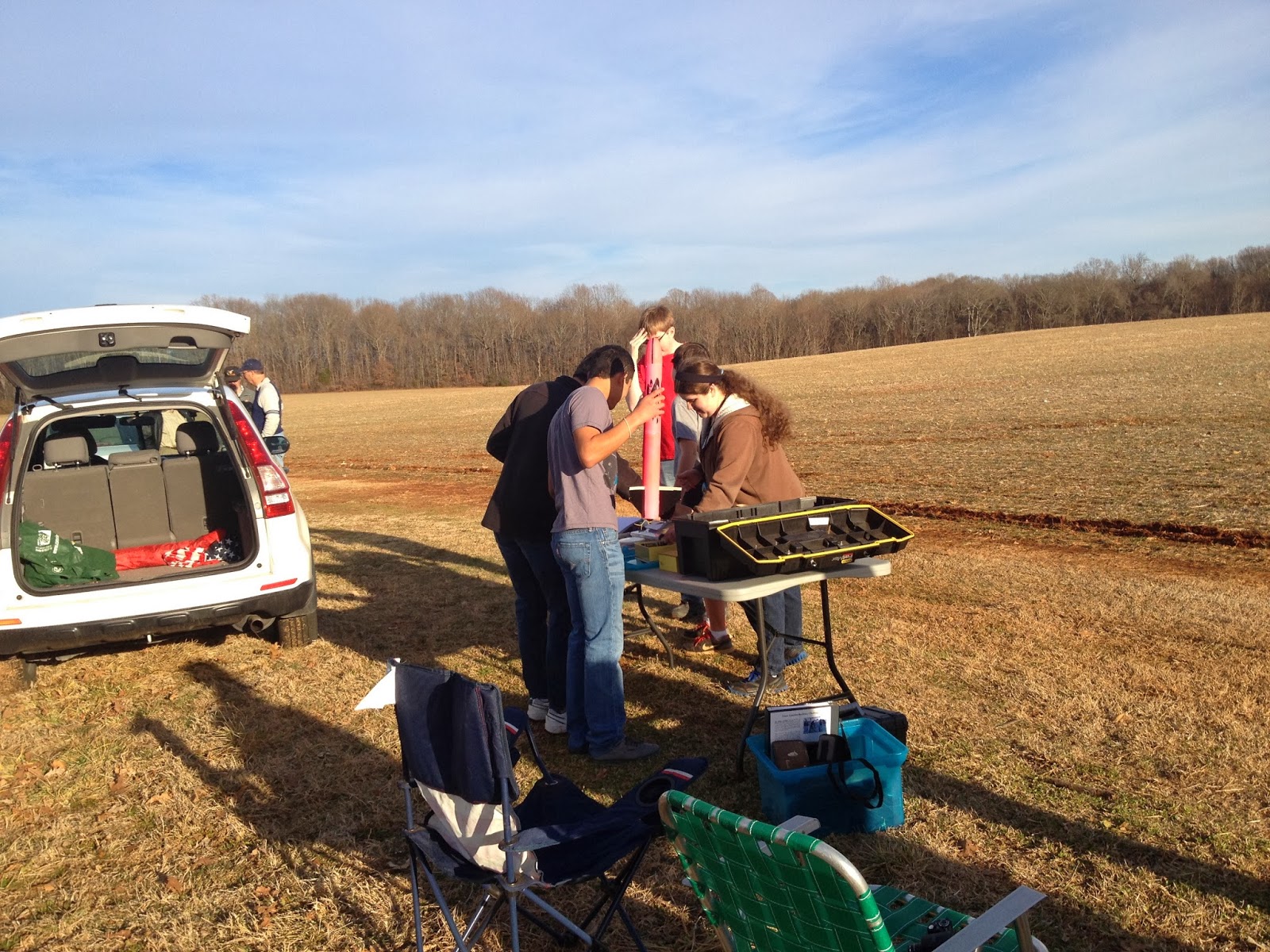 I have no doubt it will be so. This team is good!

But I would like to see lonely and forgotten Green Hornet fly just once, even if it is on a practice flight. He deserves that much.