Way back in 1968, my 10 year old self was enjoying a carefree summer morning, and, as was typical in those days, I found myself down the road at a friend's house. Even then, I was a noted nerd, famed for having my nose always stuck in a book, and he said he had just built something I was sure to like. He then pulled out of his closet the most beautiful rocket I had ever seen, all sleek and science-fictiony, with a white body, blue nose, and a black engine pod (An Estes Mars Snooper, as I was soon to learn). I was impressed, to say the least, and the feeling of awe only increased when he explained that the model could actually fly, and showed me the parachute and how the motors were placed. I wanted to know more, so he handed me an Estes catalog and went outside to ride bikes with other neighborhood kids.

For the next hour, I was lost in the world of rocketry. I read about how model rockets work, the motor classification scheme, and how to launch them. I drooled over the various kits - not only was the Mars Snooper something I wanted, but the Astron X-Ray, with its clear plastic payload section begging for insect passengers, was also a must have. By the time my friend returned, I was hooked - I came back several more times that week, each time asking for yet another glance at the catalog. I had to have a rocket, I had to get some motors, and I had to launch it! 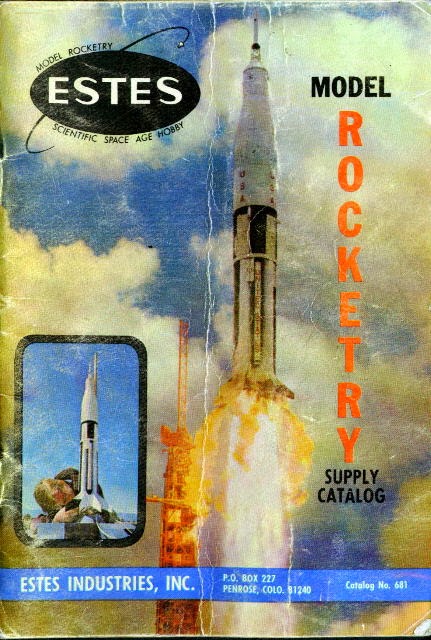 Trouble was, rockets were not cheap in those days (nor are they now). A kite could be had for a dime; a quarter made a rich kid. Most rockets were 75 cents or more, the same cost as a 3 pack of motors. A buck fifty was a lot of money for a kid back then, not easy to come by. Fortunately, my birthday was coming up, and I asked my dad if he would take me to the local hobby shop/toy store (A&M Hobbies in East Ridge) and buy me a rocket and some motors. He agreed, with the proviso that I did not catch the back yard on fire (the summer had been dry, the grass was kinda brown, and I was notorious for incinerating green plastic army men with whatever flammable substances I could lay my hands on). The deal now struck, I waited anxiously for my birthday.

Saturday morning (August 3), dad informed me that he would take me to the toy store after lunch, which, for first time in my life, made me wish that Saturday morning cartoons would hurry up and finish, because that would mean it was time to go. The world of Hanna Barbera was left in the dust of the old man's Chevy Impala as we headed to East Ridge to purchase my first space vehicle. Space Ghost and the Herculoids had nothing on me - I was going to have a real FLYING rocket! Visions of an Estes X-Ray, complete with grasshopper passenger, danced through my head during the 20 minute trip. Upon arriving, I leapt out of the car, racing through the doors to the science section in back. I was vaguely aware of my dad yelling that he would meet me at the register in 15 minutes - not a minute more.


It was not hard to find the rockets - they were at the back of the science section, bagged kits hanging from the wall. But, to my great surprise, there were no X-Rays, no Mars Snoopers, no Alphas; in fact, there was not a single Estes kit in sight. The kits were all made by a company called Centuri, which I had never heard of. Confused, I looked them over - Lil' Hercules, Javelin, Payloader II, MX-774. The names were foreign, but I knew I had to select one. Visits to A&M were rare, and I was not going to squander this opportunity. There would be a rocket leaving this store with me!

I liked the looks of the Javelin, which was advertised as a good "beginner" kit; being a beginner, this sounded good. Plus the price was right at the limit - $1.50. I wanted the Payloader II, which had a clear plastic payload section, but it was a dollar more, which would have busted the budget. Pulling a Javelin down from the wall, I went over to the counter where the old man was waiting. I asked the clerk for a pack of 1/2 A motors, which were stored behind the counter and a bag of chute wadding. The total cost: $2.60, before tax. 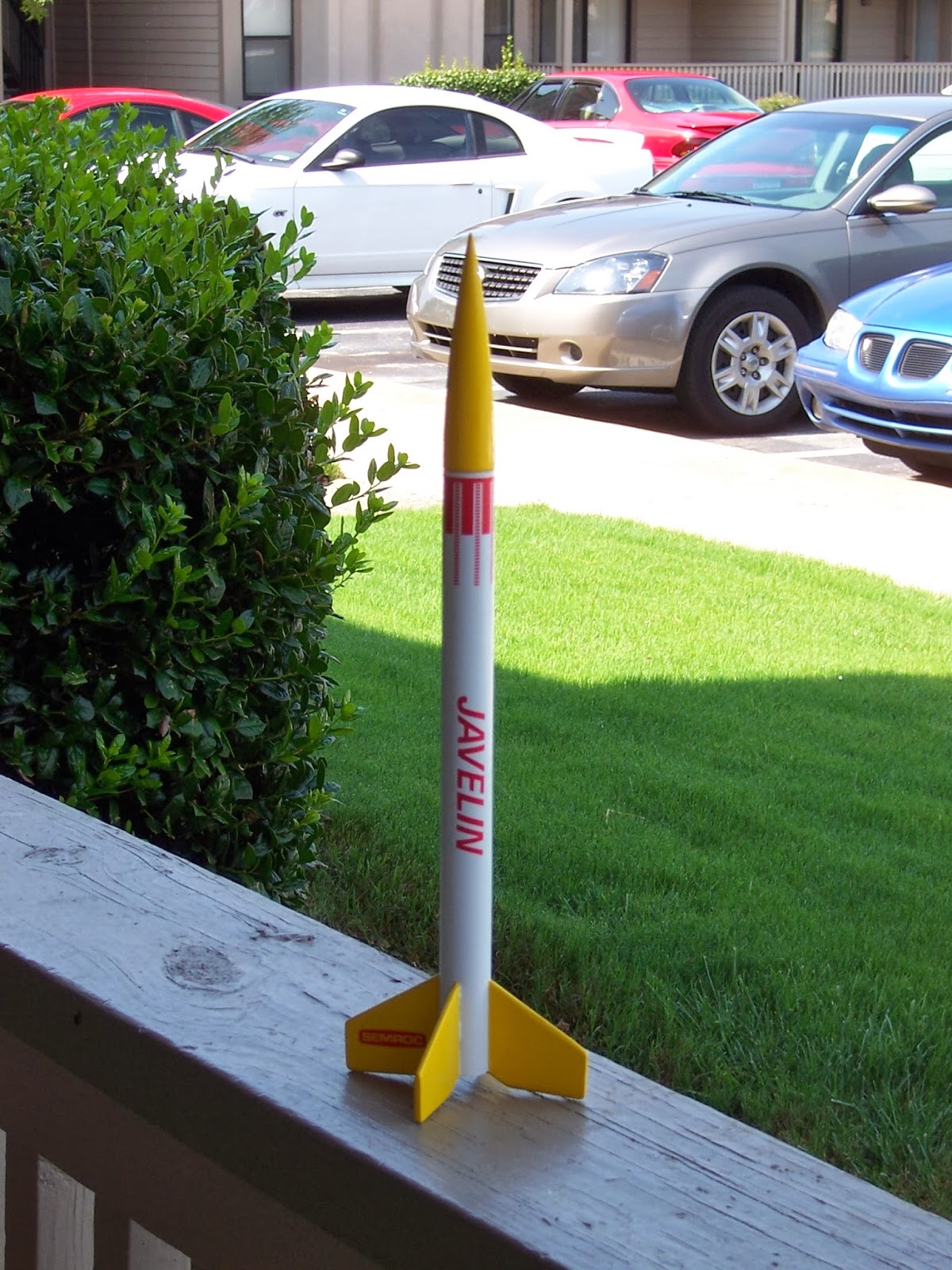 I spent the rest of the day building the Javelin - cutting out the balsa fins, sanding the leading and trailing edges round, gluing the fins and launch lug to the body, installing the shock cord, and making the parachute. The next day - Sunday - was my birthday, and it would be spent visiting both sets of grandparents. Not that I minded; like every kid, I was spoiled rotten by them. Not even a new rocket could dissuade me from gifts of money and my favorite foods. Painting would have to wait until I got back. I was, and am, not very creative - the paint job I applied Sunday evening was simple gloss black. 2 coats, some runs, allowed to dry overnight.

Monday was launch day, and I woke up wrestling with a minor problem. In order to launch the Javelin, I needed a launch pad and an electrical system to fire the nichrome igniter. The launch pad was fairly easy - I straightened a wire coat hangar to serve as the launch rod, which was inserted into a nail hole in a piece of 15" x 15" pressboard. I knew from reading the Estes catalog, I would need something with a decent current to fire the igniter; flashlight batteries were not going to cut it. Wire was in abundance at our house, as my dad was into electronics (TV/radio repair), but a power source eluded me. I finally hit upon the idea of using my model train transformer. If it could move my heavy cast iron train on the track, I figured it would have no trouble igniting my rocket motor.

This then is my first launch. Imagine the back door to our house standing wide open. The model train transformer is plugged into an outlet near the door, and a pair of 15' wires snake outside into the back yard, ending at the improvised launch pad. The Javelin sits on the pad, parachute packed, igniter loaded into the motor. I twist the bare ends of the wires around the igniter, walk back to the door and connect the other ends to the train transformer. Looking around, I give a short countdown - "5", "4", "3", "2", "1". "0!", slam the transformer swtich to max, and watch as the Javelin streaks skyward. Up, up, up it went, maybe to an altitude of 150 feet. There was a pop, and the black and yellow checkboard parachute deployed, allowing the rocket to descend gracefully in the morning breeze. I still vividly remember that first flight - the thrill I experienced seeing the Javelin fly, the relief when the chute deployed, and the smell of sulfur when I recovered the rocket and brought it back for its next flight. 46 years later, the flights continue.

And that, patient readers, is how I became a rocketeer.