The winds of March

March sees TARC season in full swing, with the teams making their qualification flights, each hoping to post scores low enough to get them into the top 100 in the country. In addition to broken shock cords, rocket motors with slightly too much or too little thrust, tangled parachutes, and numerous other rocket issues, they must contend with the weather. There's an old expression:

And in my experience, this appears true. March - especially early March - seems plagued by gusty winds, the bane of the TARC rocketeers. High winds cause the rockets to angle into the wind, decreasing the peak altitudes, which means reducing rocket weight or shifting to a different motor. Also, the teams cannot fly in winds over 20 mph, and many days have gusts over this limit. Yet, as I said, that is my perception. Is it really true that March is the windiest month, or am I biased because I am out in the field more in March, due to the TARC teams practice/certification flights? I decided to find out, at least for Huntsville.

If you can afford it, the Mathematica software package is a great and wonderful thing. It enables you to do all sorts of wondrous mathematical and sciency things without programming, and the latest versions tap into the power of the internet to fold in tons of data - astronomical, financial, geographic, and, important for this purpose, weather. I have a copy of Mathematica at work, so I fired it up and looked at wind data for Huntsville since 1980 (it can go back farther than this - I just figured 33 years was enough to answer my question).

The first thing I did was to look at the average daily wind speed for January, February, March and April:

Mathematica defaults to metric units, so I added a column with the English counterparts. Note that March is indeed the windiest month, but not by much, which kinda surprised me. 0.5 miles per hour - the difference between March and January or April - ain't that much. So if March is a lion, the months around it are at least some sort of big cats - tigers or panthers maybe. Here, the numbers would indicate that the greater amount of time I spend outdoors in March may have indeed led me to believe the month's winds are more blustery than they actually are.

What about the going out like a lamb bit? If you look at the below plot, showing the average daily values of the wind speed (in kilometers per hour) throughout March, there seems to be a downward trend as the month wears on: 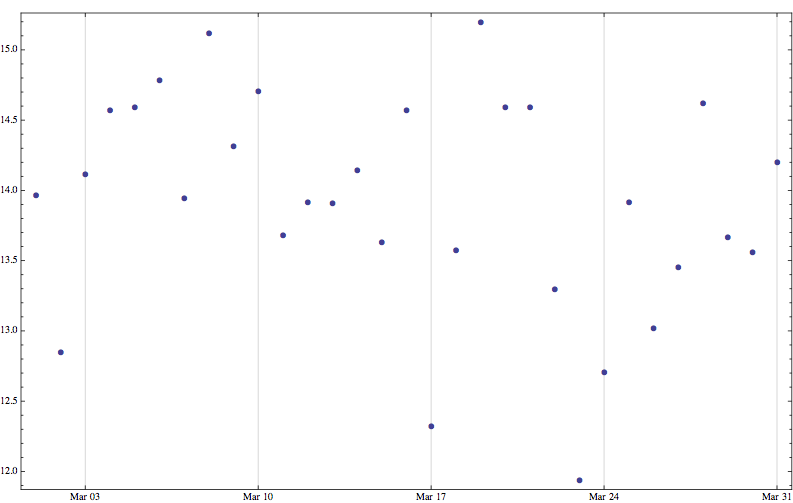