(If you are wondering what the heck the title means, I am a fan of the 1981 movie Caveman. A quick read of the Google page should provide enlightenment)

Today saw more TARC flights at the horse farm. Four teams - Falcon Rocketeers, Liberty Middle 8th graders, and two from John Paul II High School - took advantage of the warm, clear and moderately breezy weather to fly their rockets for a few hours. One of the John Paul teams made two qualification flights, the first scoring a 40 (818 feet altitude, 58.25 second duration) and the second DQ'd due to two broken eggs. There were many broken eggs this day, the most I have seen in a long time, and the teams struggled to hit the altitude mark. The other John Paul II team was consistently low, and the Falcon Rocketeers were low and high. Liberty's day was cut short when their rocket did not deploy the parachutes and came in ballistic, resulting in a mess on the ground; fortunately, their altimeter was undamaged. The rocket, however, was a goner. A fast rebuild will be required in order to make the TARC regional at Bragg Farms this Saturday.

The Sun was shining, the birds were singing, but the day was cursed by the rocket gods. I should have taken a cue from the teams' experiences and not flown my rocket, but hey, what rocketeer can resist flying whenever possible?

Every year I design and build a TARC rocket for that year's contest, to get an idea of what the teams will be facing. I figure that going through the process helps make me a better mentor (This year's rocket is STILL hanging 50 feet up in a tree on the edge of the horse farm, my $70 altimeter enclosed within its innards). Atouk was a rocket I built back in 2007 in an attempt to meet that year's TARC challenge. It was a short stubby critter (kinda like me), featuring two parallel boosters which would fall away when their motors burned out. It had not flown back in 2007, and I decided that today was the day it would finally take to the air.

During a lull in the flights, I prepped Atouk with Estes A10 motors in the side boosters and a C6-3 for the main. There would be no egg in the egg capsule, but I did load my Jolly Logic Altimeter II into the red and white payload section and taped the (mostly) reliable keychain camera - available for $6 from Ebay - to the outside below the payload section. I was hoping for spectacular footage of the boosters falling away.

The pace of rocket flights slowed considerably after Liberty's rocket augured in, so I placed Atouk on the pad, activated the camera, and gave the customary short countdown. Atouk left the pad like a bat from Hades and then began doing a few colorful cartwheels in the sky, to my great chagrin. I watched as the rocket then began the "dive of death", impacting the ground about 30 yards from where I was standing. Arriving at the scene, I found the still functioning camera near the wreckage. I switched it off and turned my attention to the altimeter, which was lying nearby. It was flashing "1825 feet" as the peak altitude, which was ridiculous, as the rocket never got higher than 75 feet or so before doing its little dance. Obviously, the impact had given the Jolly Logic an electronic concussion - I held down the button to reset the altimeter, which seemed to work (to my great relief). The payload section, egg capsule, and side boosters of the rocket were undamaged, but the top of the sustainer body was crushed. Definitely repairable.

Here is the video from the onboard camera:

What went wrong? An examination of the motor casings showed all three had ignited, so a misfire was not the problem. The video showed one booster had stayed with the rocket after its motor burned out. Its twin had fallen away, and I'm wondering if this imbalance caused the rocket to go crazy. Another possibility is that the rocket center of gravity was too close to the center of pressure without an egg in the capsule; I will have to dig out the design file from my computer archive to check this out. Until I discover the cause, Atouk will remain in the damaged box, his fate pending the outcome of my investigation.


Despite everything, I did get some nice footage of one of the boosters falling away. Here's a couple of frames: 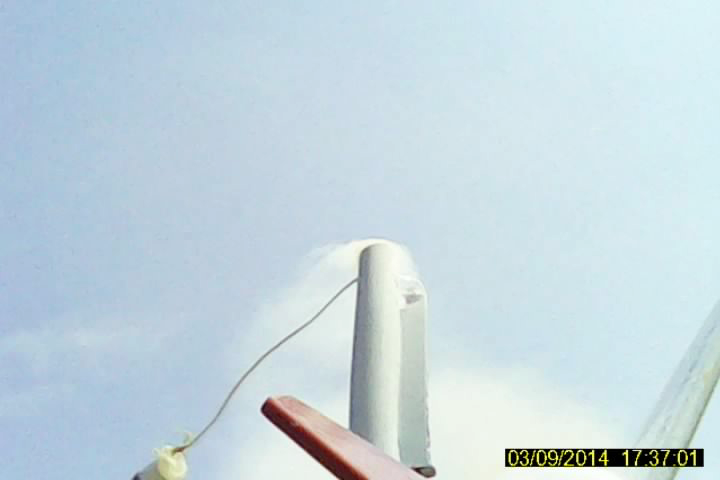 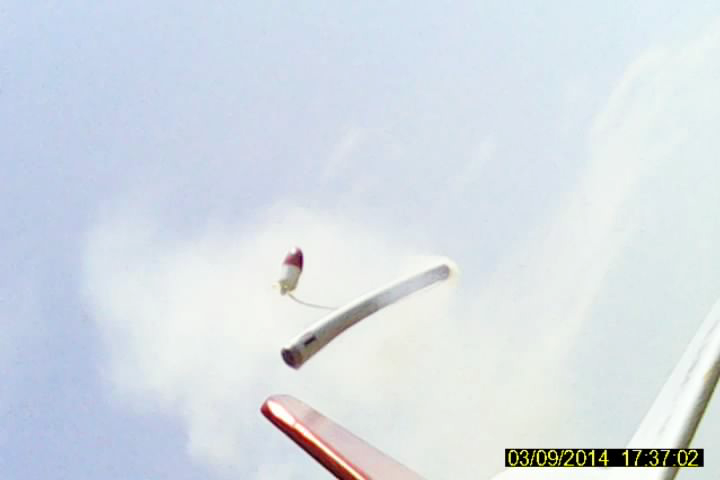