Last year Quest/Aerotech released their line of 18mm Q-Jet composite motors, which were a welcome addition to the stable of model rocketry power plants. The C12, at 9.8 newton-seconds, is a full C (the Estes C6 has an impulse of 8.8 newton-seconds) and has an average thrust over twice that of the C6 - nice for lifting heavy rockets. The D16, on the other hand, is a "baby D"; its impulse of 12.4 newton-seconds is quite a bit less than the power offered by the Estes D12, which also has a higher maximum thrust. But the D12 is 24mm in diameter, so you ain't going to put one of those in a stock Big Bertha.

I like the Q-Jets and have quite a few of them in my motor stash. However, the Q-Jet motors emit black smoke, akin to the Aerotech Smoky Sam or Black Jack composites. This is OK, but I like to see fire coming out of the nozzle - makes for better photos! Rumors had it that Aerotech was in the process of developing more Q-Jets based on the White Lightning propellant mix, and this got me excited. I love White Lightning motors - they emit a brilliant white flame and produce quite a bit of noise. They command attention at every launch in which they are flown.

Well, the rumors are now close to reality. Aerotech/Quest has submitted the White Lightning Q-Jets for certification, and Gary Rosenfield has posted some information on the forums. The new motors will be a C18 and a D20, both of which feature relatively flat thrust curves with short burn times and high thrust. The C18 has an average thrust of 19 newtons and a thrust duration a tad over 0.5 seconds, whereas the D20 has an average thrust of 18 newtons and a burn time of 0.76 seconds. It also has a peak thrust of 25 newtons at the beginning before settling down to its 18 newton plateau.

Here are the thrust curves (from thrustcurve.org): 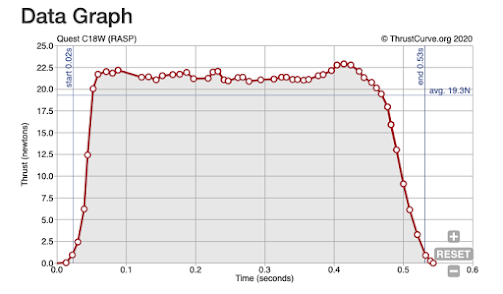 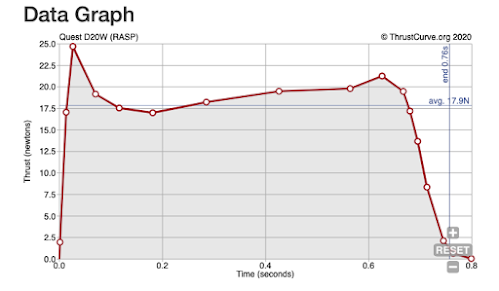 The packaging is also very attractive: 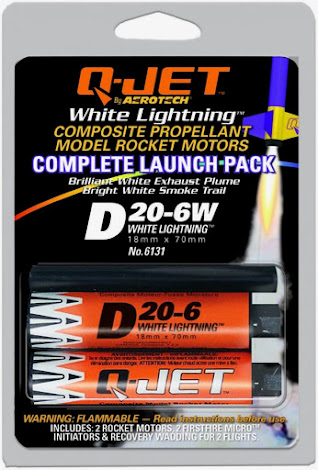 But the best thing is going to be the fire and noise! Gary posted this image on Ye Olde Rocket Forum of an Estes rocket powered by one of the new White Lightning motors: 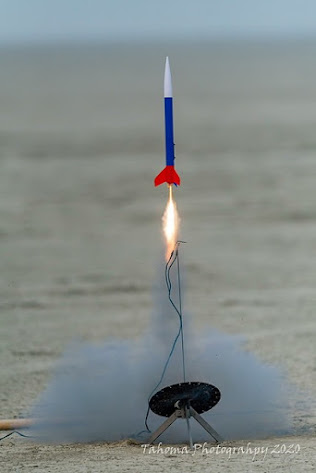