Getting rocket altitudes was tough in the old days...

Ed Mitton left a very interesting comment on my last post about tracking rockets with theodolites... In addition to trying to see a pretty small rocket at apogee, he reminded me of the need for proper equipment:

"A little history on tracking at NARAM 11...The Peak City Section of Colorado Springs owned a pair of tracking theodolites that featured a 90 degree bend in the optics near the eyepiece and some pretty hefty magnification. This combination made them extremely difficult to follow and mark rocket flights. On the first day of NARAM 11 only a small handful of egglofter flights enjoyed a closed track. Thankfully, one of the East Coast sections in attendance had brought along a set of straight line tracking devices which were pressed into service for the remainder of the contest.

Fast forward a few years - the Peak City theodolites were part of the range equipment donated to ROMAR in 1973, so I had first-hand experience with trying to use them. No wonder there were problems at NARAM! I practiced with one of the scopes for probably a dozen club sport flights, and not one of them could be kept in the field of view. A major fail! "

So not only did trackers have to have keen eyes, they also had to have equipment that allowed them to easily fix on the rocket. I can see where sighting down into an eyepiece rather than looking at the rocket would be kinda iffy. I never experienced the issue Ed had, because I shied away from altitude events - which were hard - in favor of the easier duration contests. No unclosed tracks, and building skill was not a major factor, as it had more to do with the biggest parachute or streamer you could pack into a given diameter body tube.

In my brief contest rocketry sortie, I heard complaint after complaint about tracking. Altimeters are much easier to use, even if they do add a little weight (very little - the Adrel altimeter flown in many contests weighs a scant 1.2 grams without the battery, which adds another 2 grams). Despite this, there was a bit of a debate among the contest rocketeers about using altimeters during the late 1990's and 2000's - a confidence/trust issue, I think. Things settled down in the past decade, and the advent of the NRC pretty much drove the stake into theodolites. To quote a contest rocketeer (Don C.):

"Small clubs and lack of volunteer staffing had all but eliminated altitude events anywhere but NARAM. Even at NARAM, the job of doing tracking fell to the same unfortunate few who had experience with it. Theodolite tracking is dead, mourn it if you like."

As a final note, Chad Ring produced a short R&D report comparing altimeter readings versus theodolite altitudes for 20 flights of an Estes HiJax on C motors. I have graphed the results below - you will note that the altimeter and the theodolite readings are very similar, and the second plot shows an apparent random scatter around the 1:1 line, meaning there are no real systematic differences. Also, Chad had unclosed tracks for 3 of the 20 flights, whereas the altimeter failed on one. Altimeters are the way to go! 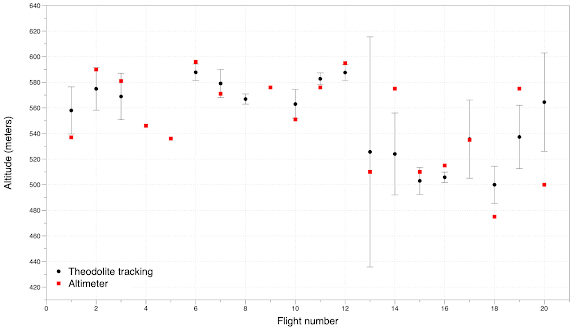 I really wish I can attend a NARAM soon - I bet tales of the "old days of tracking" are very much like my dad's stories of fighting bears to get to school, which was uphill both ways.