Picking up where I left off...

Back in the 70's, a lot of young rocketeers were members of the Estes Aerospace Club (EAC - see this post for more details). There were a couple of EAC specific kits (the Viper and Pegasus), a newsletter, a membership certificate, and - best of all - an iron-on EAC logo. As you advanced through the EAC, you received various colored "thrust bar" iron-ons, which you added to your T-shirt. This shirt became your badge of rank, and the rocketeers in my neighborhood wore theirs to every launch, showing off their rocketry prowess. You were ok if you had the blue thrust bar. Magenta wearers were scoffed at, and those with just the basic gold were ridiculed. I personally wore the green - the red was unattainable, as Camrocs, Cinerocs, and Transrocs were well beyond the means afforded to me by my allowance.
The EAC faded away as the many years passed; then, back in 2004, I discovered that the National Association of Rocketry had something called NARTREK, in which you advanced levels similar to the old EAC (except Estes kits were not required). NARTREK intrigued me... First, there was the name - nothing with 'Trek' in it could be bad - and second, it had been around for a very long time, since 1978. I wondered how I could have not known about it, given that it was prominently featured in Model Rocketeers of the late 70's. I guess I was so wrapped up in college, I neglected to properly read my rocket magazines. If I had, I would have known not only of the program's existence, but that the NARTREK name was not just NAR joined with last half of Star Trek, designed to appeal to us nerds. It actually stands for something, as you can see from the logo: 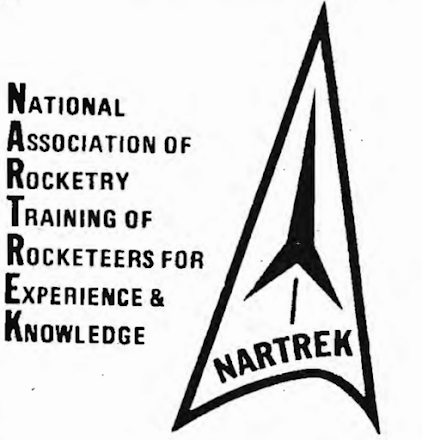 Well, ok, so there's a little Star Trek mixed in...
The NARTREK creators also did not like the program being compared to the EAC. NARTREK, they said, was designed to help NAR members advance their rocketry skills, preparing them to design safe rockets and to compete in competitions; it was not a gimmick to get young rocketeers to buy more kits. In the words of Chas Russell, the first honcho of NARTREK:
"ROCKET ON!" How could I not want to be part of a program like that?
And so I obtained my Bronze and Silver packs, and began my voyage through NARTREK. Bronze level was super easy - all you had to do was:
Did all the flights in a single launch, filled out the forms, attached the 4x6 color glossy photos printed on my spiffy ink jet, and mailed the materials to NARTREK Base (ok, so there's a little more Star Trek). My Bronze certificate soon arrived, along with little bronze NARTREK logo decals to put on my rockets (badges of honor, I suppose).
I started Silver immediately - did the boost glider flight in February 2005 using an Estes Dragonfly (which was a very nice glider, BTW) and followed through with a cluster flight the following weekend (3 B6-4s in my Semroc Goliath). I was rolling!

And then I just stopped...
Don't remember why - probably got sidetracked into some other part of rocketry (TARC maybe?). Anyway, I did not do the other 2 Silver flights (payload and scale) - NARTREK simply went out of my mind and stayed gone until this week, when I ran across my NARTREK packet in a pile of some old rocket papers. I had recently seen some posts on YORF about other rocketeers wanting to finish NARTREK, so I got to thinking that I ought to do the same. But 16 years had gone by - would I be allowed to pick up where I left off, or would I have to start back at the beginning? So I emailed George Scheil, the current NARTREK coordinator. He responded quickly and let me know I could pick up right where I left off, as if it were yesterday. He also informed me that I still had to mail in the paper forms with the photos.
I can't remember the last time I printed photos - probably back in 2004 for my NARTREK Bronze. Talk about nostalgia!
So I have added NARTREK Silver and Gold to my goals for 2021. Time to finish what was started many years ago. I have even located some old 4x6 sheets of glossy photo paper.
NARTREK - something every rocketeer ought to do, even if it takes them forever. Check it out here!
Posted by Bill Cooke at 2/27/2021 06:58:00 PM