Liberty launches a TARC rocket on a practice flight

Earlier this week, I was suffering through a cold; today, after some decent rest, I felt well enough to join Duane for a trip out to Pegasus field and watch some TARC practice. Nate was out there with his Liberty teams, and they had already put a bird in the air by our arrival at 10 AM. The Liberty teams are very efficient; in the two hours they were at Pegasus, they set a good pace, completing a total of six practice flights. They had a bit of trouble hitting the altitude mark, with one broken egg and a few kicked motors, but the Liberty teams walked off the field with their rockets intact. This was not true for the Falcon Rocketeers, whose primary rocket was destroyed when it came in ballistic on its first flight - shredded body tube, egg yolk all over the place, and an altimeter that seems to have suffered major electronic brain damage.  Not daunted by the buzzard now circling overhead, the Falcons switched over to their backup rocket and made four successful flights with this model; if the buzzard was searching for more rocket corpses, it was disappointed.


The performance of the blue and green backup rocket was puzzling to the young rocketeers, as no matter how much weight was added or taken away, it veered sharply into the wind, ending up about 100 feet shy of the altitude goal. It was as if the rocket was defying all logic, absolutely refusing to go higher than 750 feet.  The team's last flight was around 2:30 and yielded a disappointing peak altitude of 730 feet; the Falcon Rocketeers left the field musing on the mysterious behavior of their backup and laying plans for the construction of new rocket to replace the destroyed primary. However, there was one bright spot - they achieved a new record in prepping and launching the rocket for the final flight in under 20 minutes. Duane, the "benevolent dictator", was pleased.

Marc is becoming a regular at these Saturday launches, and he was there today with his children and his retro "Red Grasshopper" rocket. He also intended to fly a Semroc Orbital Transport, but that model suffered a mishap in the car on the way to the field; hopefully, it will fly at our next launch. The Red Grasshopper is a crowd pleaser with its sci-fi looks and slow takeoffs - its first flight was picture perfect, but the parachute did not deploy on the second, resulting in a very hard landing. There were a few pieces, but it think it is repairable, especially given Marc's building skill.

I couldn't imagine a sunny day at Pegasus without flying a few of my birds, so I brought four. The Centuri Nova clone and the Estes Stinger would make their first flights, joining my Rocketarium scale model of the Viking 7 and the battle-hardened Little Beth X-2. I started with the Stinger, which put in a good show on an A8-3. All seemed well until I inspected the model after landing, when I discovered the paint on the leading edge of one fin had been knocked off by the nose cone snapping back at ejection. Muttering a curse at Estes for too short shock cords (and at myself for not replacing it with a longer one), I put the model back in the SUV; it now resides in the minor repair box, awaiting a paint touch up. No biggie, but still annoying.

Next was a flawless flight of the Viking 7, riding the fire of 2 B6-4 motors into the sky. The clone of the Centuri Nova stunned everyone with its speed - a light, small rocket really moves when you have an A10 motor stuffed in its rear. Then came time to fly the rocket that never ceases to pose a challenge to me - the Little Beth X-2, loaded with 2 B4-2's in the outboard pods of the 1st stage, with a B6-0 sandwiched between, and a B6-4 in the upper stage. The plans for this model - Estes Design #57 - call for a C6-0 rather than a B6-0 in the lower stage, but I, an experienced rocketeer of many decades, knew that a B6-0 would work just as well, and also save me a few yards of walking. Never mind that all past flights of this model that used a 1st stage motor combo different from that specified in the plans have failed spectacularly - today would be different.

The Quest Q2G2 igniters had no problem igniting the 3 booster motors, and Little Beth X-2 streaked off the pad, the keychain camera recording the action from the rocket perspective. All went well until the B6-0 burned out, at which point the rocket started gyrating wildly; the first stage then fell away, the gyrations stopped, and the model continued up to a lower than expected apogee. There was no ejection charge, and I watched in horror, fully expecting the model to dive straight for the ground. But I suppose the rocket gods took pity, for Little Beth's upper stage descended horizontally, spinning rapidly about the long axis. This slowed the fall, and the rocket survived its landing with no damage. The post flight inspection showed that the B6-0 in the first stage had been kicked, and that the B6-4 in the upper stage had not ignited, which explained the low altitude and no ejection charge. I was still puzzled by the gyrations just before the stages separated, and hoped that the flight video might provide some clues.

A few hours later, I had uploaded the video to my computer and was looking through the individual frames. The video seems to indicate that the 1st stage was partially separated from the upper around the time the B6-0 burned out, as you can see part of the coupler connecting the stages. That would explain why the upper stage motor did not ignite, but was the separation caused by gyrations or by the hot gases from the depleted B6-0 (you know, the gases that were supposed to ignite the upper stage)? My best guess is the latter, and I suspect the gyrations were caused by a thrust imbalance between the B4-2 motors in the side pods (which burned for 0.2 seconds longer than the B6-0), aggravated by the camera taped to the side of the rocket. Once the first stage falls away, the ground is now longer blurry in the video, verifying that the gyrations had stopped. 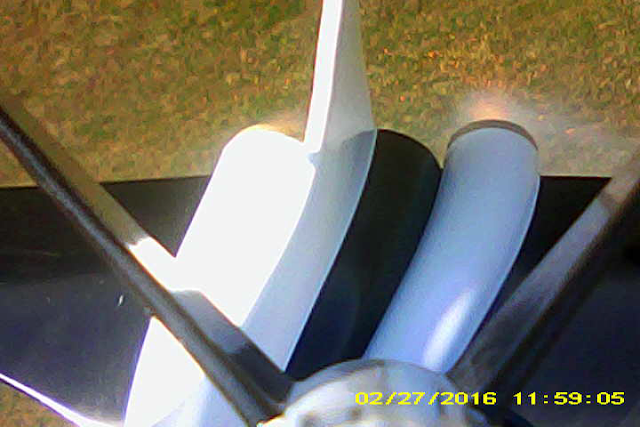 My take-away from this flight is that the center motor of the 1st stage must have a burn time equal to or greater than that of the motors in the side pods. A C6-0 burns for 1.8 seconds, 0.8 seconds longer than the B4 motors, so it is the recommended choice. And I think I will use the C in future flights, even if it does mean more walking - Little Beth has had more than enough hard landings.