The Falcon Rocketeers had scheduled a practice today at noon, which provided an opportunity for me to a launch a few members of the fleet. At first, the weather seemed almost perfect - slight overcast, very little wind, and temps in the upper 40's. However, as the day drew on, the wind strengthened a bit and shifted direction to from the north rather than from the east. North winds are always cold, and I found myself trying to keep my hands warm by sticking them into my coat pockets. Outside of the chill, it was a very good day for a launch; I sincerely doubt we will have many days with such quiet winds over the next couple of months.

The Falcon Rocketeers are improving - even though their scores were not that great, they managed to put in four practice flights in the two and a half hours we were at the field, without a single problem. Making 4 straight flights with no mishaps is a pretty good streak, and the Falcon Rocketeers deserve a little shout out for this. They have the cadence, so now they need to work on their scores.

Marc joined me and Duane on the field, with family and rockets. He made three flights; the first, an Estes Executioner, lumbered off the pad on an E9 motor, but did manage to grab some altitude in the quiet air. Unfortunately, the parachute failed to clear the body tube and the rocket nosed in for a very hard landing. The damage is repairable, but it will require a new body tube segment to replace the crumpled one. His other flights involved his Geezer TARC rocket; the first flight ended with a cracked fin, but a little five minute epoxy had it ready for a flawless second flight. Marc is a lot smarter than me, and he already is working on an altitude control scheme for this year's Geezer TARC challenge. I shall have to hope that my experience and deviousness can overcome his technology.

Duane was accompanied by his recently-repaired Geezer TARC rocket, the yellow and black "Beast." I love the Beast -  big and robust, it's the archetypical TARC rocket. We use it as a set piece in our TARC recruitment talks because it just screams TARC. It also flies well - today's flight was arrow straight on a Aerotech F50, with a good recovery in the field.

I brought four rockets to fly, and I am pleased to report that all of them flew without any problems. I started off with my Estes Chuter-2 on a B6-4, followed by my EAC Firecat clone on an A8-3. I worry about the Firecat; being a model of a fictional target drone, it has fins on fins and a simulated antenna, all of which can be easily broken on a hard landing. Fortunately, a 12" parachute brings it down plenty slow, and hitting the ground should not be a problem if it lands on grass. My third flight was that of my Estes Citation Quasar clone, also on an A8-3. Gordon at Excelsior Rocketry produced a quality body tube wrap that gives this model a classic look.

Big Bertha's sister Beulah made my final flight of the day, with a Jolly Logic Altimeter 3 in her payload bay and a keychain video camera strapped to her side. Bluetooth issues have disappeared since I paired the Altimeter 3 with my Kindle, making the device a true pleasure to use. I used the Kindle to start up the altimeter just before placing the rocket on the pad, and it downloaded the data automagically when the rocket was returned to the prep table. The D12-5 in Beulah powered her to 679 feet, a little higher than expected, but the video was somewhat disappointing due to the mostly overcast day. 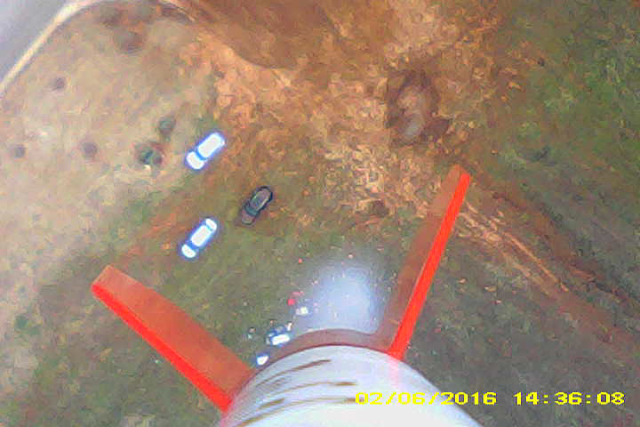 After the launch, Duane and I stopped at Burger King for a belated lunch; I must confess that I was glad to be indoors. Even light North winds can give one a big chill!
Posted by Bill Cooke at 2/06/2016 06:35:00 PM