While I was visiting the Air and Space Museum near Dulles last month, I ran across the Tiny Tim rocket, developed during World War II. The simplicity and aesthetics of this weapon appealed to me immediately:

The Tiny Tim air-to-ground missile was the largest American rocket in service during World War II. Loaded with TNT, it could destroy coastal defense guns, pill boxes, bridges, tanks, and ships. Tiny Tims sank at least one Japanese ship and seriously damaged another. During the Korean war, one Tiny Tim knocked out a key bridge. Visible in this partial cutaway are simulated solid propellant sticks and some of the rocket's 24 exhaust nozzles.

A Google search yielded more info. This 10 foot long puppy carried a 148 lb warhead up to 1600 yards and had a thrust of 3,000 lbs. It was typically mounted underneath aircraft, as you can see from the below images: 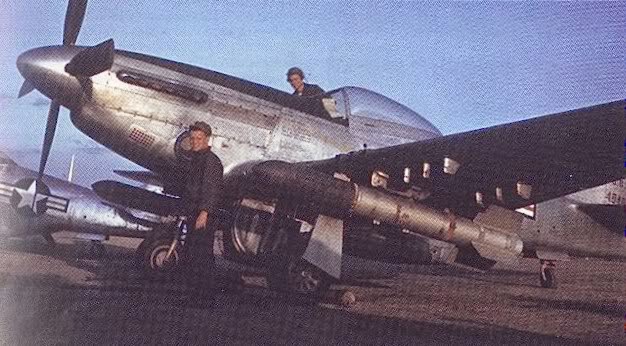 Today it rained muchly, which put the kibosh on priming/painting rockets (I did get manage to glue the fins on the Viking, though). A little water is not sufficient to stop the rocketry bug; I remembered this rocket from my trip and fired up the computer to create a design of a flying model. The first part is always the most difficult - choosing a scale. This is largely driven by two things - the diameters of the available body tubes and the sizes/shapes of the available nose cones. I knew I wanted this rocket to be at least BT-70 (2.217 inches) in diameter and the Fliskits' upscaled Deuces Wild nose cone for this tube looked to be the right shape. This being decided, it was fairly easy to take the dimensions of the real Tiny Tim and work out a scale - 1/5.2774. Not a nice fraction, but hey, we have computers now, don't we?

This gave an overall rocket length of 23 inches. Subtract 4 inches for the nose, and you are left with 19 inches for the body tube. I knew I would probably need nose weight, so I split it into a 3 inch payload section and a 16 inch sustainer. Inspired by the 24 exhaust nozzles of the original, I went with a 5 motor cluster as the power plant - 4 13 mm motors (Estes A10's) and a single 24 mm motor. Such a combo would allow for many different motor configurations (1, 3, or 5), producing altitudes to suit launch field constraints and my mood. It should also instill terror in my friends when they see me try to light 5 motors simultaneously.

It took a couple of hours to get all the measurements and do the design in Open Rocket. It turns out that I need about 1.5 ounces of weight up front to insure stability, but even with this a single D12 should send Tiny Tim to over 500 feet. 4 A10's and a D12 will put it at around 870 feet, and an E30 will produce a max speed of about 0.5 Mach and a peak altitude of 1350 feet. Not too shabby.

After finalizing the design, I also played around some more with the photo rendering feature of Open Rocket. I was able to render my version of the Tiny Tim as if it were just launched from a plane to a surface target. I am really beginning to like this software - It's quite powerful (as long as you stick to basic rocket designs), and you can't beat the price (free).

This will be the next rocket project once I finish with the Wizard and Viking I am currently building. Time to start gathering the parts…
Posted by Bill Cooke at 8/31/2014 08:53:00 PM