NAR's annual convention, NARCON, started on Friday afternoon and finished just a couple of hours ago. As usual, it was great - lots of informative and entertaining talks, good keynotes, socialization, and news from rocket vendors. But this year was special - COVID had eliminated the possibility of an in person NARCON, so the conference went virtual. This may have initially been met with trepidation, but the meeting was absolutely superb - not one iota decrease in quality - and best of all, a record 500+ people attended (as opposed to 100-150 for an in person NARCON). Not only was the attendance 4 times greater, but the virtual format had the advantage of eliminating one great problem experienced by past NARCON attendees. There are 3 parallel tracks, and you often had to make agonizing choices between two interesting talks held at the same time. This year, the conference vendor was making videos of the presentations available to attendees as soon as they were over, so you could go back at your leisure (up to a month from now) and catch up on the talks you missed. How cool is that!
So, what were the highlights? Well, I loved the manufacturing forum announcing the forthcoming goodies and the two keynote talks (on Osiris-Rex and commercial spaceflight). There were excellent video tours of LOC Precision, Kennedy Space Center, and the rocket capital of the world, Estes Industries. Among the talks, there was an outstanding video presentation by James Duffy on kit bashing common kits into works of art, some great tips on making and using decals by Randy Gilbert, and how to use and care for common rocket altimeters by Bernard Cawley. Because of the packed schedule I missed several good presentations, and I will be looking at those over the coming days.
And let's not forget Ed LaCroix's proposed logo for this year's NARCON...

Bernard's talk on altimeters solved a long standing mystery that has had me puzzled over several years. My altimeters often reported a sharp dip in altitude at ejection, indicating that the compartment with the altimeter was getting pressurized by the ejection charge. I figured it may have been due to too large vent holes in the payload section (altimeters need to sense the outside air to work properly, and vent holes are the easiest way to accomplish this). So I made my vent holes smaller, but the dip remained, showing up in flight after flight. I had resigned myself to living with it, but in his talk Bernard pointed out something that was so obvious I was kicking myself for not thinking of it. 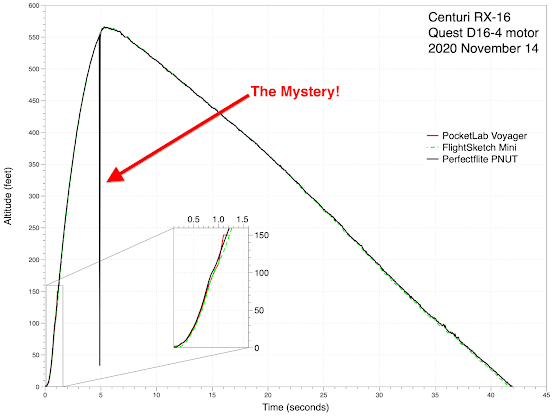 Balsa is a very porous wood.
I use balsa couplers at the rear of my payload sections to connect them to the rest of the rocket, and so the ejection gases were flowing through the balsa into the compartment, spiking the pressure. The vent holes quickly allow the pressure to drop, but not before the altimeter records the spike as a sharp decrease in altitude. Simple, and you fix it by sealing the balsa - easiest way is to coat the coupler in wood glue. That will block the ejection gases. So I will soon start sealing the balsa couplers on my rocket payload sections, starting with the RX-16.
NARCONs are good - even old dogs like me learn a thing or two.
Posted by Bill Cooke at 1/31/2021 03:59:00 PM