New fleet additions and some organization...

I find myself getting less tolerant of clutter as I get older - less tolerant of a lot of things, actually. So I have designated 2020 as the year to get my life much more organized and reduce my footprint down to a reasonable size (i.e., toss out a bunch of junk that has accumulated over the decades). This has had the unfortunate consequence of placing my builds on hold, as I have little time to sand, seal, and paint. However, I do find small bits of downtime here and there, enough to assemble quick build kits. So here are my latest fleet additions, assemblies that are so fast and easy I hardly call them builds.

The Estes Zombie and Wacky Wiggler are usually available only in starter sets, but eRockets has a limited number of them as single kits (much cheaper!). The Zombie is a 5 minute assembly, being nothing more than a 3 fin rocket with a preprinted zombie pattern on the body tube. Normally I wouldn't even think about getting it, but it adds to my Halloween collection, and you can never have too many Halloween-themed rockets. The Wacky Wiggler takes a bit longer to build, as it consists of short segments of body tube joined together by a long string. The segments separate at ejection and the whole thing just flutters down to earth. Unlike the Zombie, it has been around for a while, first making an appearance in the 2003 Estes catalog. I am looking forward to seeing it in flight.

The last new fleet member is something I have been trying to acquire for quite a while - the Estes Alpha IV. Released in 1998 to mark the 40th anniversary of Estes Industries, it sports a metallic red body tube, black fins and nose cone, and gold 40th anniversary stickers. I have been looking for a reasonably priced model for many moons, and one finally popped up on eBay last week. I built it in about 30 minutes this afternoon, and it now joins the other Alphas on my shelves.

Speaking of shelves, I have put a lot of those together lately, for displaying my rockets. I am happy to state that most of them are now off the floor and proudly line a few of my walls. With the clutter reduced, entropy has been decreased somewhat, and I am much more content. It's kinda nice to be able to look around and see your models. 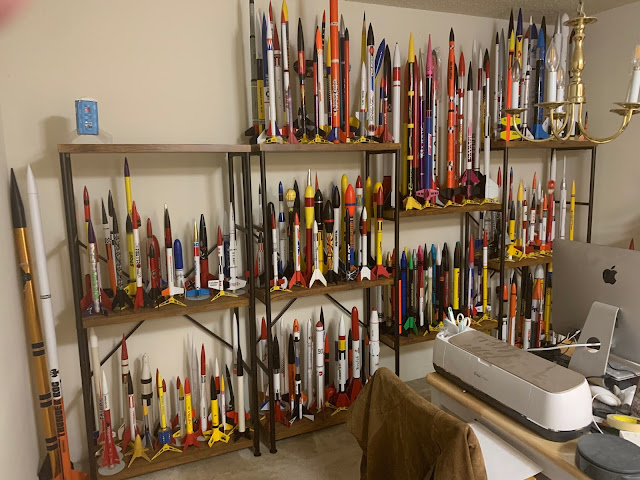 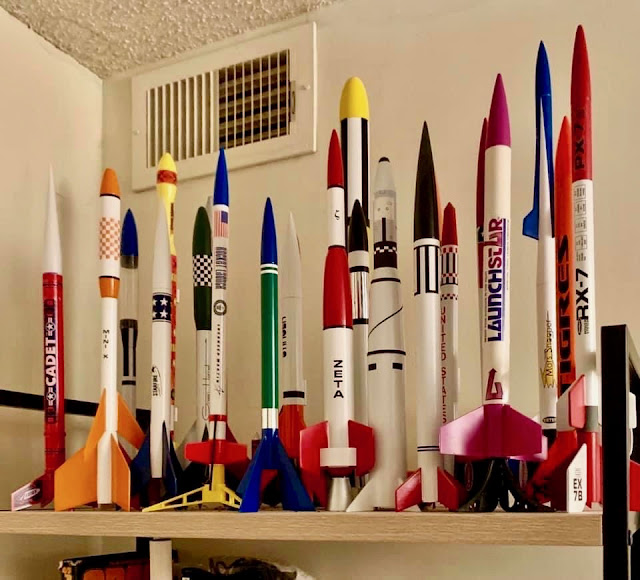