At the end of this week, I received an email from Estes, featuring this image: 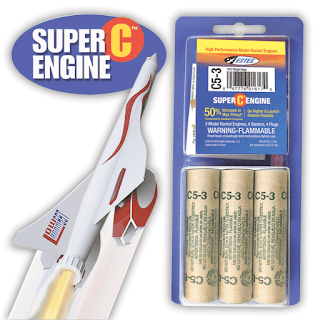 This got me very excited, for the following reasons:


However, my excitement was a bit dampened by some posts on the internet from folks who did not understand the need for the C5 - what was wrong with the good old C6, after all? I mean, it has a higher average thrust, doesn't it (6 newtons as opposed to 5)?

Well, let me explain why this is a great thing, and why it is the likely precursor of an even greater thing, namely, a C5-0 booster motor.

First off, the labels on a model rocket motor are just general guides - you can tell the impulse class (in this case, C, which means a total impulse between 5 and 10 Newton-seconds), and the average thrust, which is generally (but not always) the total impulse divided by the burn duration.These are helpful in motor selection, but sometimes you have to dig deeper into the motor numbers in order to discern the differences within an impulse class. The label on the motors doesn't indicate there is much difference between the C5 and C6, but the motor thrust curves show otherwise.

The first thing you notice is that the C6 has a peak thrust of about 11.6 newtons, dropping down to a sustained thrust of about 5 newtons for most of its 2 second burn time - total impulse close to 9.8 newton-seconds. The C5 has a peak thrust of 21.8 newtons and drops down to 4 newtons, burning out after 1.75 seconds - total impulse is 9.5 newton-seconds. Both motors reach their peak thrust at about the same time, but the C5 puts a much greater percentage of its impulse up front, meaning it can accelerate a heavy model more quickly off the pad. That's why the ad said "50% Increase in Max Thrust" (actually it's more like 47%), but you would have never gotten that just looking at the motor casing,

So, a C5 can lift a plastic Saturn 5 better than a C6, but what else is it good for? Imagine, if you will, a C5-0. This booster engine, with the bulk of its power up front, makes possible the 18mm powered 3 stagers of Yore - notably the Arrow 300 and the Farside/Farside-X. No longer will we have to stick a 24mm motor mount in the booster, as in the current Comanche-3, but can build them as the master designers intended. These motors, when they are released, will be the beginnings of a return to Eden for us old rocketeers - bring on the 3 stage clones!

In the meantime, I have a few C5-3's on order - need to encourage Estes to get around to making those C5-0's.