I have made good progress on my backlog of rockets - the Mini X and Zeta are finished, Ool (My 2nd Geezer TARC rocket) has its 2nd coat of primer, and the Boyce Aerospace Redstone missile has another section of its 3D printed fin can sanded. It's time for a new project, but I have a slight problem - I'm out of sanding sealer, and Brodak, my supplier, is also temporarily out of stock. This kinda puts the kibosh on any rockets with balsa, as my results with skinning fins with paper vary significantly in quality and Fill N' Finish doesn't harden the balsa. This leaves me stuck with kits having plastic fins and nose cones, and most of these do not excite my interest. So what to do, what to do?

Once again the Internet came to the rescue...

I was watching the YouTube video of the manufacturer's forum at NARAM-61; NAR has two of these, one at NARCON in late winter and at NARAM in late summer, and they are a great source of information on what the various rocket vendors are planning in the way of upcoming releases. At NARAM, Aerotech announced that they are rebranding all their mid-range motors (E, F, G impulse) under a new label, one with a very venerable and honored name - Enerjet. For those of you unfamiliar with rocketry history, the Enerjet line was Centuri's attempt to commercialize sport rocketry in the early 70's, featuring some kickass E and F motors and kits. Never successful, the line was given up for dead in 1974, with the motors and kits sold off in a catalog yard sale. Even when gone, Enerjets were a legend held in awe by rocketeers like me, and the big boys of rocketry continued to fly them throughout that decade. I only dreamed of owning Enerjet motors and a kit, as the cost was way beyond my allowance and the altitudes (thousands of feet) were way too high for any fields to which I had access. However, I now have more money and access to the club flying field, so it is time for me to realize another of my teenage aspirations. 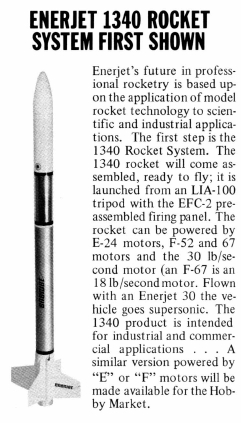 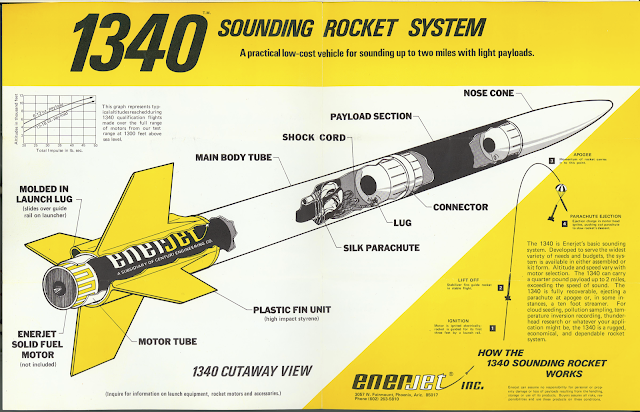 The easiest of the Enerjet kits to build was the 1340 Sounding Rocket, featuring a plastic fin can and nose cone (and hence, no need for sanding sealer). This sounded like a good place to start, and a glance at the online plans showed I had all the parts in stock. Even though Enerjets went away in the 1970's, the plastic fin can and nose cone used in the 1340 and 1340/20 sounding rocket kits survived the decades, being reused in the Centuri Argus, the two stage Estes Longshot, and the Estes Eliminator - I'm sure there were others, but my memory is not what it used to be. All of these kits are out of production, but the Eliminator just stopped being produced, so you can still buy one at AC Supply or eBay. So I yanked an Eliminator kit out of my stash and removed the nose cone and fin can, putting the remaining kit components in my parts bins. The other pieces for the 1340 are readily available - a 13" length of ST-13 body tube (Estes BT-56, which also is no longer produced), an 8" length of ST-13 for the payload section, a coupler, and a 5" length of 29mm motor tube (also known as LT-115 or BT-52). The original kit used a plastic coupler with a 0.1" ridge, but I substituted a balsa coupler and glued a 0.1" piece of body tube in its middle to simulate the ridge. I also used the thick-walled LT-125 for the 13" lower section, as the 29mm motor tube smoothly slides into it without the need for centering rings or even tape.

The nose cone would not fit into the LT-125 tube, so I was stuck with ST-13 for the payload section, which meant that the BC-125 balsa coupler would be a bit too small in diameter for the ST-13 tube. I fixed this by gluing an HTC-13 cardboard coupler onto the top of the balsa coupler. It slid smoothly over the balsa piece and snugly into the ST-13, so the inner tube diameter mismatch problem was solved. I then filled all body tube spirals with Fill N' Finish, sanded and washed the plastic parts, and shot all external surfaces with a coat of Krylon gray primer. After this dries, I will spray on white primer, followed by a base coat of white. The fin can and motor mount will be glued on last, after the painting is done - easier that way.

The only problem is the decor. The standard grey, gold, and white doesn't strike me as being very visible (light rockets powered by F motors get way up there), and the red, white and blue scheme is too conventional. I'll have to ponder this as the build progresses. In the meantime, I shall look forward to this rocket's first flight on one of the new Aerotech E motors with the spiffy Enerjet label!
Posted by Bill Cooke at 8/16/2019 02:15:00 PM