1 PM Sunday saw me and Duane setting up his canopy at Pegasus East. The day was humid, with intermittent light showers intermixed with a very hot sun, and I sure was not going to sit in my camp chair without something over my head; besides, we needed cover to insure that the rockets and motors didn't get wet. It was our first real launch in months, and nothing was going to stop us from flying a few rockets. Duane had prepped 7 models, I had 4 ready to go, and Vince showed up with 3 of his own - the next couple of hours were going to be filled with rockets taking to the sky and the small clouds of black powder smoke wafting downwind. We also had a couple of spectators - Allen and his friend Laura stopped by the field to watch a few launches. Allen committed a minor sacrilege by bringing a non-flying Lego Saturn to the field, but it was easily forgiven in our zeal to ignite some motors.

First to launch was Duane's 1/200th scale Estes Saturn V on a C6-3. It was a textbook flight, with the parachute deploying at apogee and a gentle landing on the grass. Mine and Vince's Saturns would also make great flights later on, and I must confess I am rather fond of this Estes RTF, which looks great on display and in the air. I highly recommend purchasing one for your fleet.

This year's 4th of July rocket, the #1447 Estes America, followed Duane's Saturn V. The A8-3 powered it to just over a couple of hundred feet, where it deployed its 9" nylon parachute for a safe, soft recovery.

Duane loaded his venerable old Geezer TARC "Beast" on the rail we had set up to the east of my tripod pad. This rugged yellow and black rocket was propelled by a much older Aerotech F27-8R Redline manufactured in 2007! As you might expect, this motor huffed and chuffed for several seconds before finally sending the Beast skyward on a nice pillar of red flame. After the chute deployed, Duane remarked that it probably was the best flight he'd seen with this model; I kept my thoughts about being too cheap to get fresh motors to myself. Seriously, Duane inherited a store of old motors and he seems determined to fly them, even if there might be a CATO or two (Most of them just chuff like crazy). I have to admire his guts.

My Estes ARTF (Almost Ready To Fly) Rookie was next. I had mated it to an Estes booster designed for this class of models, so it flew two stage on a C11-0/B6-4 combination. My HD keychain camera was taped to the side and there was a Altus Metrum Micropeak altimeter tucked inside, so this puppy was instrumented to the max. The flight was good, but Murphy whacked me hard - the Sun was obscured by clouds at launch, making for a very dark video (keychain cams have poor sensitivity), and the altimeter readings were pure nonsense. I think this was the same altimeter that gave bad readings on the SLS test flight several days ago; back then I thought it was because there were no vent holes in the SLS model, but the Rookie had them, so I'm thinking I have a defective altimeter. I will have to contact Altus Metrum and see what can be done about a repair or replacement. Anyway, I did get a nice staging sequence from the camera, so the flight was not a total failure.

Back on the rail pad, Duane had his Estes Trajector ready to go. He must have felt the need for some altitude, for the Aerotech F42-8T put that bird way up there in the highest flight of the day. Allen remarked that it would have probably been wise to have used a Jolly Logic Chute Release, a sentiment I'm sure Duane shared as the Trajector was borne by the wind far away to the northeast, past the tree line and into a soybean field. He was gone quite a while on his search, but came back with the rocket and a few pounds lighter from his trek in the hot Sun.

Vince's first flight was also the only one that resulted in a lost rocket. He had volunteered at the Space and Rocket Center world record attempt, and so acquired a few of the models. This "Guinness Pathfinder" was loaded with an Estes C6, and we never saw it after he pressed the launch button. Our best figuring placed it down near the south edge of the field, but who knows? Vince did take a quick tour of that side, but turned up nothing. I have made a note never to fly my model on a C; heck, I'm not going to use more than A impulse - if I fly it.

Duane then flew his Estes Death Star in what was perhaps the most fun flight of the afternoon. The C6-3 took the rocket up to a peak altitude of about 150 feet, whereupon the Death Star broke apart into 4 pieces, each recovered by a bright orange streamer. Allen and Laura were delighted by this model, and Duane certainly enjoys the comments made each time he flies it. I followed the Death Star with a launch of my scratch Probe-18 rocket, loaded with another Micropeak altimeter. The flight was textbook and the altimeter returned good data. So at least one of my Micropeaks work. 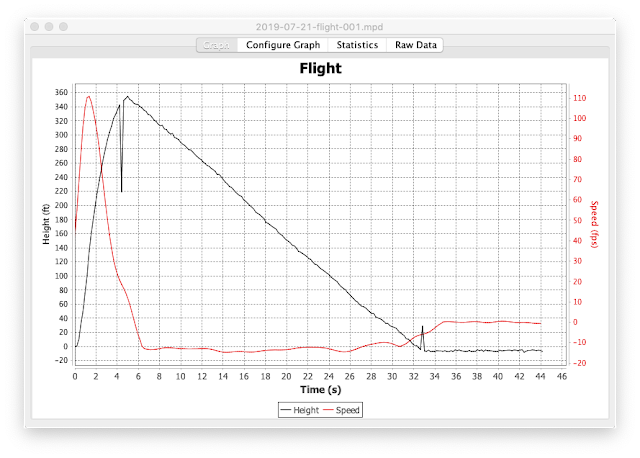 Vince launched a nicely-built Semroc Recruiter on an Estes A8 - I think he was done with C motors in light rockets for the day. It deployed the parachute near apogee and landed close to the pads, making for a short recovery jaunt. Duane went next with an Odd'l Rockets Birdie, which did what Birdies do - leave the pad fast, turn over, and plop down on the ground. A nice quick flight on an Estes A10.

The last two flights of the day were made by Duane - his red, white, and blue Geezer TARC rocket soared to 501 feet on an F39 composite, and the Chute Release deployed the parachute pretty close to 300 feet (one again wonders why it wasn't in the Trajector?). The very last flight was made by his Cherokee-D, which got decent air on a B6-4. There was a comment or two about a "Cherokee-B", but I couldn't throw shade - a D motor in that bird on that field would have been tantamount to rocket suicide.