In my previous post, I mentioned that the day was perfect for flying - clear skies, light wind, and comfortable temperatures. Soon after arriving at Pegasus, I realized that the latter was most definitely not true; low-to-mid eighties may seem not so bad when displayed on the screen of a cell phone, but experiencing them in the middle of a field puts quite a different perspective on the definition of hot. By the time the launch ended at 2 or so, I was panting like a rabbit after being chased by hounds. Sun block and water, my friends - bring them, use the former and drink the latter. They are your tickets to making it through a hot launch day.

Anyway, on to the launch...

Duane and I arrived at Pegasus about 11; folks were already there, including Fletcher Cannon, a new Geezer TARC participant, and Marc Loertscher, who won the contest a couple of years back. Marc was there to watch this year, and had brought along a young one to observe the anticipated carnage. Duane, Fletcher, Allen, and I proceeded to set up the range, and the other contestants - Patrick and Vince - showed up as we were putting things in place. All was ready to go around 11:30, by which time we had a nice crowd of family, local TARC team members, and UAH students settling in for the show. It was time to get some rockets airborne.


Allen started things off with his Estes Cosmic Explorer, which barely topped 300 feet riding an obviously defective F30 motor. A C6-7 put Duane's venerable Cherokee-D way up there, providing a good check on the wind direction despite a parachute failure; the rocket landed horizontally on the weeds, undamaged. Allen's modified Estes Partizon was up next on a CTI G83 Blue Streak reload. It reached an altitude of 1138 feet, and the dual deploy worked well, even though Allen forgot to reset the main deploy altitude to something appropriate for Huntsville (He last flew it at NARAM in Pueblo). Art was the last to fly before the Geezer TARC flights began. His scratch-built 24 mm powered rocket - the 1st rocket he flew with HARA - put in a flawless performance on a D12-5.

And now for the Geezer TARC flights...

Patrick courageously went first, but his 3D printed orange Geezer III rocket had an igniter misfire. A new igniter was put into place, but the F22J reload seemed to have trouble getting going - it huffed a bit before coming to power, and the rocket only reached 488 feet altitude, far below the 856 foot goal. After the launch, I noticed that the picture sequence of the launch showed the igniter wires (and presumably the igniter) hanging on until the rocket had almost cleared the rail - that didn't help the performance. The good news is that the 3D printed model showed no signs of melting - which even Patrick expected - so Geezer III can fly again.


Sequence showing Geezer III dragging the launch cables with it (Click to enlarge).

Fletcher stepped up next, and his Saturn-decor rocket put in a very good flight. It soared to 906 feet and was down in just over 53 seconds - a solid 79 score, good enough to make me sweat even more in the midday heat.

My turn had come - I placed the Reliant on the pad, hooked up the clips, and asked Duane to do the count and launch while I took pictures with my phone. All those hours of simulations and fretting over parachute sizing had come down to this moment, and I could only hope that my shaking hand would not mess up the launch pictures. Reliant, powered by an Aerotech F30FJ-6, rode a pillar of black smoke into the sky, its path straight and true, with no spin. Ejection occurred just past apogee, and I was relieved to see all three parachutes - two on the egg capsule and one on the sustainer - fully deploy. The egg capsule landed just a little over 41 seconds after launch, with the sustainer touching down about 20 seconds later. I was elated to hear the PNUT altimeter beep out a peak altitude of 801 feet, and even more excited when the eggs were confirmed to be without cracks. For the first time in Geezer TARC, I was in the lead, with a 62 score. Only Duane and Vince stood between me and victory, and even if one of them bettered Reliant's score, I still had my second entry, Artemis, waiting in the bullpen.

Duane placed his entry on the pad. Painted blue with a gold nose, this rocket was a little smaller than mine, and had a finish a bit on the rough side, which he hoped would cause enough drag to offset the power of the loaded Aerotech F32-6T. His hopes were quickly dashed, as the rocket bulleted off the pad, almost disappearing in the blue of the sky. Clearly too high, but the amazing thing was that the egg capsule landed almost exactly 45 seconds after liftoff - a perfect time. Sure enough, the altimeter reported 1102 feet (the highest TARC flight of the day), so we were left scratching our heads as to how those eggs got down under two deployed 14" parachutes from that altitude in just 45 seconds total. At the needed descent rate of about 23 feet per second, it should have taken something like 55 seconds. I hope Duane will share his altimeter data, because inquiring minds want to know. Last year, Duane's flights were too low; this year's was too high, giving him a 254 score.

I was still in the lead, but the reigning TARC Geezer, Vince, the creator of Frankenstein rockets and shunner of simulations, was next. Would he neutralize all my scientific and engineering efforts with a thrown-together model and a randomly chosen motor from his stash? He had carefully kept his entry in his vehicle until this moment, and I was quite apprehensive as he approached the pad with this year's creation. The time of reckoning had arrived...

Vince's model surprised me by being a fairly conventional egg lofter. Painted white, with red fins, an orange transition, and a yellow nose, the rocket's egg capsule consisted of a length of ST-20 tube and the transition and nose cone from an old Estes Scrambler (the 1980's version) or Omelet Express.  The sustainer was based on Estes BT-60 tubing, with a 24 mm motor mount and swept fins. I had considered something similar back when the rules were announced in May, but abandoned the concept because of the limitations imposed by the BT-60 lower section. The lower weight and surface area (less drag) put this model in the twilight zone of motor choices - E's were not enough power, and F's were too much. You can only cluster up to 3 18 mm motors in a BT-60, and 3 C6's were not going to get the job done. So this design was not viable unless I was willing to cluster composites (3 AeroTech or Quest D's), and I am not yet crazy enough to try that with a trophy on the line.

Vince's flight made me glad I tossed the design. His rocket was way, way overpowered on an Aerotech F44-8W, achieving a peak altitude of 1009 feet and a duration of 107 seconds. A 399 score, which meant I was the winner of Geezer TARC!

Finally! I got the victor's trophy, and Vince, last year's winner, got the the Skunk trophy for the worst flight. After all, 1) his score was bad, and 2) his rocket was the only one to sustain damage, when the streamer on the sustainer failed to deploy. Cracked a couple of fins.

I was sorely tempted not to fly Artemis - I had won, it was hot, and I wanted some food - but the old girl beckoned to me from the car. So I loaded her up with eggs and a Firefly altimeter, and stuck 2 Estes E12-6's into the motor mount. I figured that these would provide enough power to get me close; 2 additional A or B motors would be risky, as simultaneously lighting 4 motors is no picnic. She quickly left the pad on a straight-up trajectory, with chutes deploying just past apogee. The egg capsule landed just over 45 seconds after liftoff - a perfect time - with the sustainer landing near the southwest corner of the field quite a bit later (24" parachute was too large). The Firefly display showed a peak altitude of 871 feet, just 15 feet too high. A 15 score - the best ever in Geezer TARC, and good enough for a qual attempt. I am very glad I flew Artemis!


The launch lurched to an end soon after Artemis' flight - Duane flew his Mammoth on a F52, and there were a few model rocket flights. Around 2 we packed up and left the field. Upon arriving home, I placed my trophy on my rocket shelf, where it sits proudly. I am very pleased - to quote Mark Watney, "I scienced the sh*t out of this."

And it paid off. 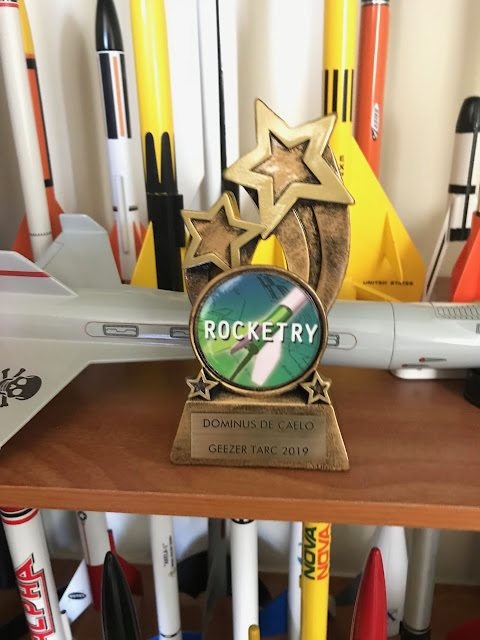