Turbulence in the rocket world...

This month has seen a few significant rocket-related disturbances in the Force:

Dr. Zooch rockets is going out of business - Dr. Zooch has for many years produced a line of ant-scale kits of various historical rockets (and a few of his own designs). They are what we call "builder's kits" - no laser cut fins, no plastic parts. You are given the raw materials and a set of instructions - which are very sarcastic and funny, btw - which you must use to turn out a fairly nice flying replica of the original. I have built 2 of his kits, and have several in my kit stash awaiting my attention.  Dr. Zooch had been making a little money off his kits, but Wes Oleszewski has recently suffered from some health issues and decided to close up shop. A shame - I really liked his kits (and his books - he is also a pretty good author).

Good thing I grabbed one of the last ant-scale Falcon Heavies...

The other big news concerns Estes. As you may have heard, the big E's parent company Hobbico had gone into bankruptcy and was placed on the auction block. Despite some reassurances from John Boren (the Estes chief designer) that Estes was a profitable part of Hobbico (other divisions were posting the big losses) and it would be sold intact, many rocketeers were worried about the fate of model rocketry should Estes be broken up or fall into the "wrong hands." The rumor mill is now alive with the news that the company has been bought - intact - by Estes Industries, LLC, owned by the Langford family. This is great news, as the Langfords are long-time rocketeers and staunch supporters of the hobby. Back in high school, I met John Langford at a summer science program, and was amazed by his rocketry knowledge and talents (He was working on a scale Athena model for the Internats). Later, I started a career with NASA, while he went on to found and head a very successful aerospace company (Aurora Flight Sciences), which was just sold to Boeing. The Langfords are good at business and very, very smart, so I expect great things to happen with Estes under their watch.

But they will take charge too late to save the E9 and C11 motors, unfortunately. I'm going to miss them, as the C11 was the only viable booster below D impulse for 3 stagers like the Comanche-3, and the E9 was noted for its unpredictability - you never knew whether the rocket was going to have a flawless flight or disappear in a fiery cato, with pieces flying everywhere. Those of you who have flown E9's know what I mean - that twist of the gut that happens as you start the countdown from 5. It will soon be a thing of the past, at least for BP motors.

Finally, 2018 marks the 60th anniversary of Estes; they have come up with a very nice logo to mark the occasion: 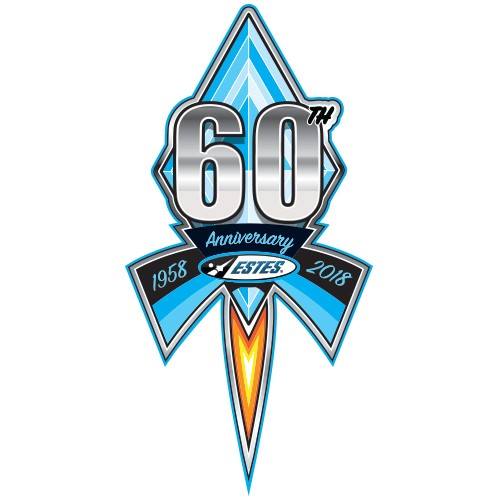