They did what with a Saturn V?

This week's episode of the "Big Bang Theory" featured a model rocketry thread in which Wolowitz resurrects some of his old rockets in anticipation of sharing his past joy in rocketry with his soon-to-be-born son. He and Sheldon build an Estes Saturn V, which they intend on launching out in the boondocks. As usual, things go wrong - after a bit of an argument over whether countdowns should be "L minus..." or "T minus...", the launch button is pressed and the Saturn V explodes, sending pieces everywhere. Very painful for a rocketeer to watch... especially when you consider how much effort goes into building one of those kits.

However, the show did bring another Saturn V launch to mind - one that happened in front of tens of thousands of spectators and that was also nationally televised. Unlike the "Big Bang" launch, this one was eminently successful, and a tribute to the talents and skills of the folks at Estes and the Texas rocketeer who built the Saturn.

And it happened indoors!

So dear friends, sit back, click the image below, and read the story as written by the man himself, Vern Estes.  However, I'll provide a little beginning: 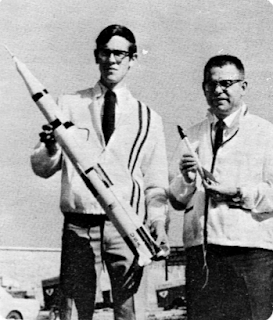 This is one of my favorite rocket stories - I find it amazing that
We probably can't do anything like this in the current environment of regulations - which I find kind of sad. I sometimes miss the enthusiasm of the 60's and 70's; we believed we could do anything (and some did)!