Which is the smoothest ride - rod or rail?

For the first time, the TARC rules state that the top 100 contestants making it to the Nationals cannot use a rod; however, they can practice and qualify using one. It's difficult enough to achieve a good score with all the variables associated with the rocket, so I can greatly sympathize with any team showing up at Manassas that qualified with their rocket being launched from a standard 1/4" rod. Yes, they can add rail buttons and practice in the month between final score submission and Nationals, but what effect will this change have on the flight performance? Does a rail exert more friction on the rocket than the rod, thereby causing a loss of altitude and cancelling the benefit of its increased rigidity? Or is the rod, with its well known "rod whip", going to cost the model even more altitude? It's important I find out, because a couple of my designs for this year's Geezer TARC barely make the goal with the optimum motor configurations for deployment at apogee, and I need to know if I can go with these motor combos. Duane attributes his loss last year to rail friction (his model was a couple of hundred feet low), and I have no desire to follow in those footsteps.

Here are a couple things I do know:
The above are not very helpful in providing the numbers I need. That means I need to collect data - which means an experiment is in order. After a little thought, I have devised the following scheme:
Here is a screenshot of the OpenRocket design of the modified School Rocket, which I call the GDTV-1 (Guidance Drag Test Vehicle #1). I have already started cutting tubes and have ordered the rail buttons in anticipation of performing the experiment at this year's Southern Thunder (June 24/25). Pegasus Field is already overgrown, so I doubt we will be launching there much until it is mowed in the Fall. This will force me to attend the club launches in Manchester if I want to fly every month. 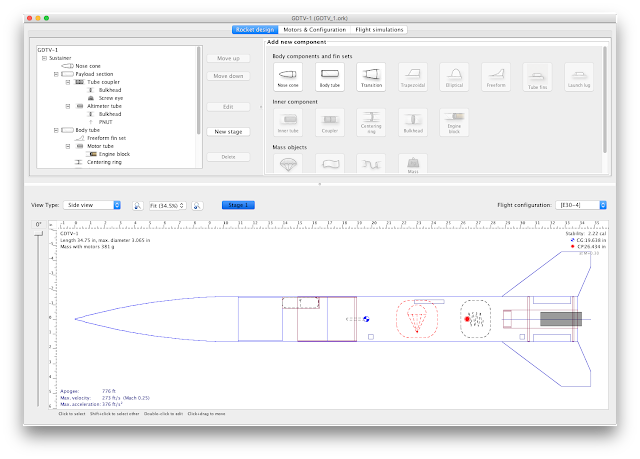