Folks sometimes ask me why I like clusters so much - while it is true that I like duplicating reality (practically all launch vehicles of size make use of clustered engines), it is also true that the variety of black powder (Estes/Quest) motors has decreased with time. No longer do we have the "port-burning" B8, B14, or C5 motors, capable of propelling heavier models off the launch rod or serving as the 1st stage booster in 18 mm 3 stage rockets, such as the old Estes Farside or Centuri Arrow 300. This is why the Estes Comanche-3 uses the 24 mm C11 in the 1st stage - no 18 mm motor in the current line up can safely lift the model. So when I need heavy lift, I often resort to 18 mm clusters (yeah, I know - there's the Aerotech D21, but a) it's a composite and b) is fairly expensive). Besides, clustering adds a bit more suspense to the launch and the rocket definitely looks cooler riding multiple pillars of fire into the sky.


So you can easily see why I was intrigued when Centuri released their "Rocketry Exploration Power System Outfit" back in 1977. Designed to teach "advanced" rocketry, it featured a 18mm 2 stage minimum diameter payload model (the RX-7) and, wonder of wonders, a ST-16 (BT-60) based payloader (the RX-16) with interchangeable single and dual 18 mm motor mounts. The motor mount setup, called "Plug and go" was simplicity itself - A JT-60 coupler was glued into the main body tube at a depth corresponding to the length of a JT-60 coupler. Then the end of a motor hook was inserted into a slit cut just below the coupler; this was held in place by gluing a piece of paper-like material (Tyvek) to the body tube over most of the length of the hook. The motor mounts were constructed the standard way using JT-60 couplers. All you had to do was pull back the hook, slide the motor mount into the tube, and release the hook, which prevented the mount from separating at ejection - just like inserting a motor. My youthful self was all over this - I ordered one of these sets, which unfortunately did not last a year (I was pretty hard on rockets back then). 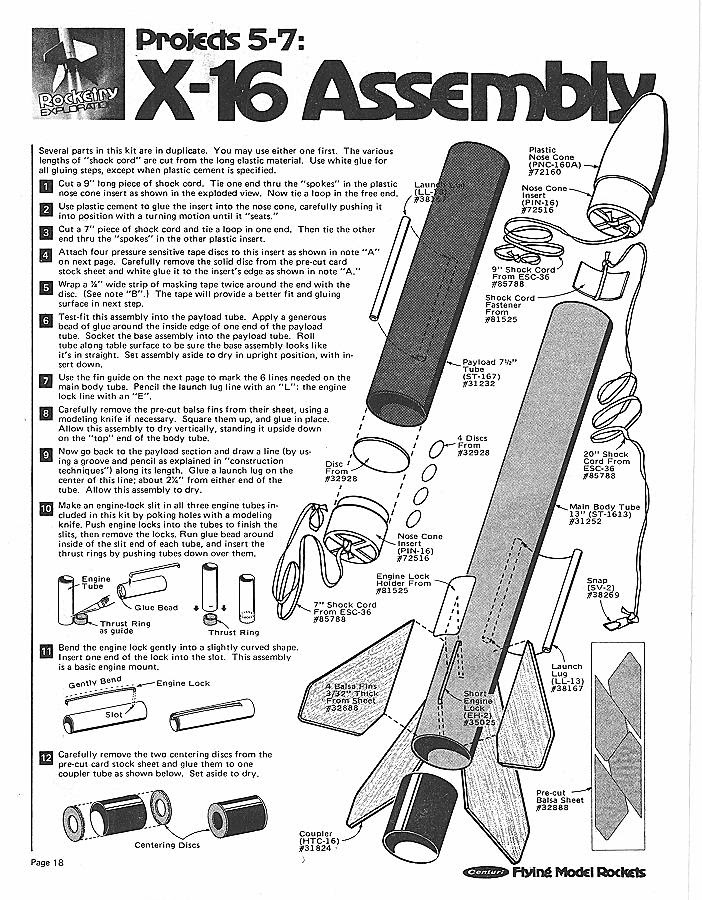 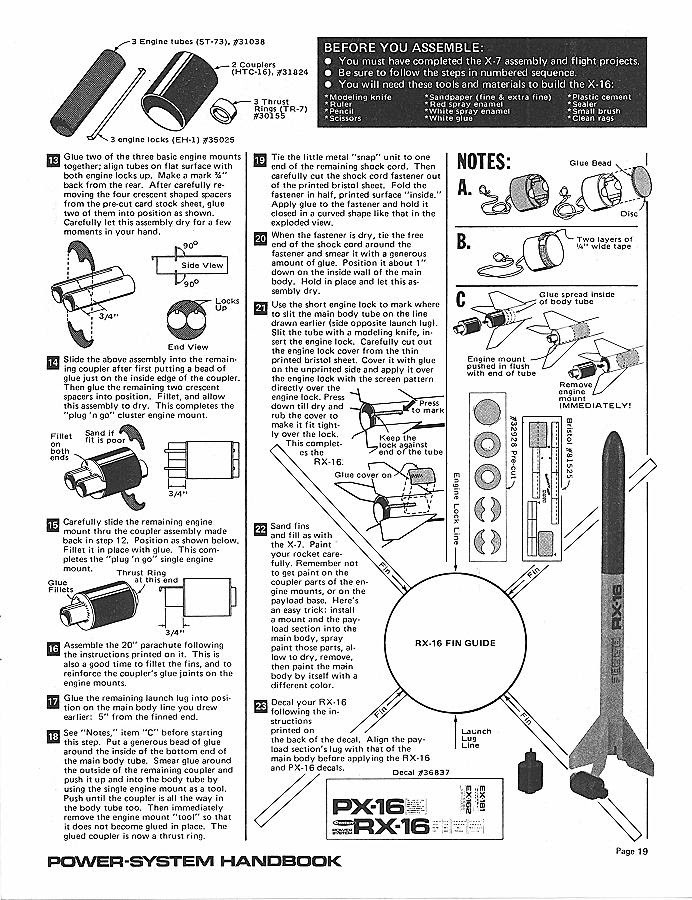 Pages from the Centuri Power System manual showing the construction of the RX-16
Click here for the full size scans.

Flash forward to summer of 2011 - While looking for a new project, I ran across the Power System manual on Ninfinger's site. I remembered how much I enjoyed the versatility of the RX-16, and after confirming that Semroc had all the parts (Balsa version of the plastic cone and laser cut fins being the most important), set about building a clone. However, this time I would add a 3rd motor mount - for 24 mm motors - in addition to the two that were part of the set. Because of its versatility, the RX-16 soon became the workhorse of my fleet, lofting cameras and altimeters to a range of altitudes and testing stuff like the Jolly Logic Chute Release. I love this rocket - I can choose a low impulse B for small fields, cluster A motors for school demos, or cram a D into it for altitude or payload lofting. It is incredibly flexible.

So flexible in fact, that I decided to include the "Plug and go" concept into Beulah, a Big Bertha derivative with a payload section. Good thing I did, for Beulah is built for survivability and turned out to be a bit on the heavy side - I have to resort to C's or D's to get decent altitude out of her, even with an empty payload section.

There are other schemes for interchanging motor mounts, like the twist and lock approach used in the the Semroc SLS kits and the MRC Concept Series. The Centuri approach has the advantage of simplicity and is very easy to implement - even for novice rocketeers. Give it a try if you want a versatile mod roc.