Much has been going on lately - this year's TARC season is coming to a close, and there have been lots of flights made as the deadline nears. Unfortunately, I haven't been up for blogging - I was hit by a bout of bronchitis, which took me out for a few days, and recovery has been slow. However, the blog must not be neglected, so today's post is kind of a picture log of some flights made back on March 6. The birds that flew on that day were all Centuri clones, hence the title of this post.

Proof that staging does not always yield higher altitudes for the equivalent impulse. Compare this plot from December 5 in which the RX-7 flew in its two stage configuration (A8-0/A8-5) to the one below it, which is the March 6 flight of the RX-7 on a single B6-6. The RX-7 went over 150 feet higher with the B6-6! 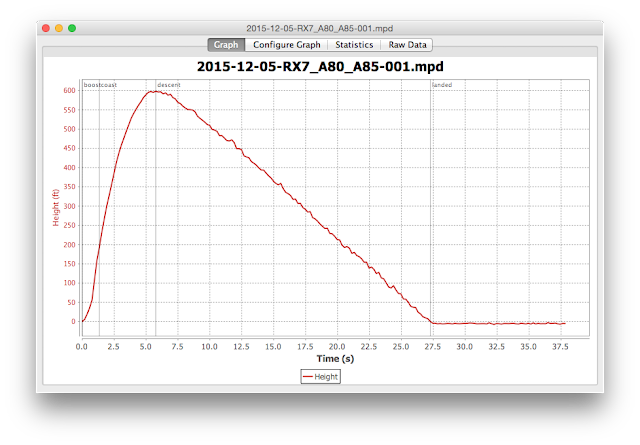 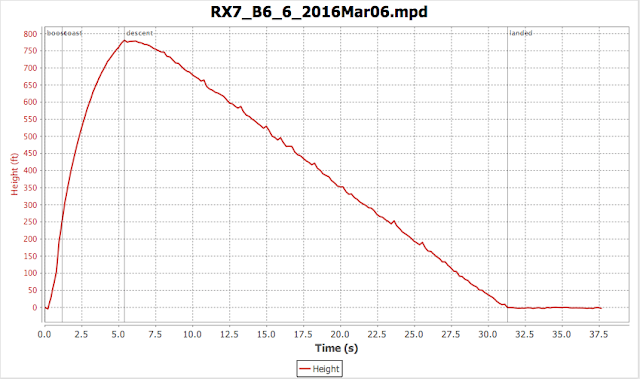 Next up was my Long Tom two stager, powered by a B6-0/B6-4 motor combination:

The Long Tom was followed by my Screaming Eagle clone, propelled by a B6-4:

My last two flights involved clones of a couple of Centuri science fiction rockets. First was the Vector V, first released way back in 1972. Back then, I put a several into Oz by stuffing C6-7's into them; age has moderated me a bit, so this flight was on an A8-3: