One of the great things about social media is that we can post pictures of our rocketry-related activities for the enlightenment and approbation of all (yes, I can use big words when I want). I was cruising Facebook recently, and noticed a pic someone had posted of a 3 motor cluster he was building from parts. Look at the image below - notice what's wrong? 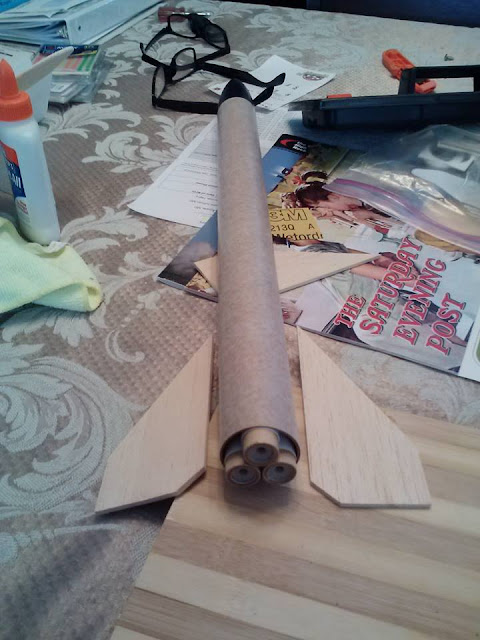 If you realized the grain in the balsa fins is running the wrong direction, you would be right. One of the cardinal rules of rocketry is that you never, never, never, never lay out and cut wood fins so that the grain runs parallel to the body tube.  In this orientation, the fins are very weak, and easily snap at the slightest force (think breaking off a piece of a Kit-Kat candy bar). This was very quickly pointed out to the builder, and he sought to rectify his error by laminating the fins with paper, While this will add some strength, it will not be enough; after all, this is a cluster of 24 mm motors, and 3 E12's in this puppy will be the equivalent of a F36. Can you say that this rocket will leave the pad like a bat out of Hades? At high speed, even papered balsa fins will "flutter". For those of you who have never seen fin flutter, here is a YouTube vid of a high power fiberglass rocket going supersonic; the flutter occurs at max speed, about 10-11 seconds into the video:


So guess what is going to happen when that 3 engine cluster gets some speed? Papered or no, the fins will flutter and snap along the grain - large amounts of fin area will fall away, and the rocket will go unstable. NOT the thing you want to happen at a launch, especially if there are lots of bystanders.

The proper way to make/attach fins is with the grain parallel to the leading edge. In this orientation, the fins will flex, but the grain is (almost) perpendicular to the force. Of course, your rocket could be going so fast that the fins shred no matter how the grain is oriented (a common mishap with supersonic attempts), but it will take much more force to break them. So, when you build a rocket, orient the grain of wooden fins parallel to the leading edge, as depicted in the below image of the Balsa Machining School Rocket (currently under construction). 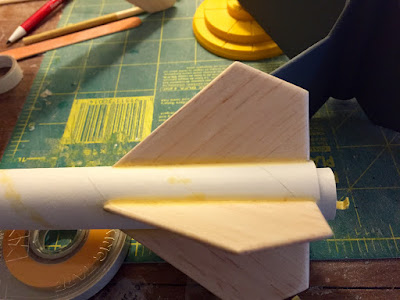 This is one of the things I check when I am acting as a RSO (Range Safety Officer) at a launch. I have seen too many instances of fins shredding due to wrong grain orientation; in one case, a guy had to dodge a rocket after two of its fins broke in pieces right after leaving the pad. Unfortunately, some RSO's don't pay much attention to the fin grain; even painted, one can wriggle the fins to check the strength, so it is not hard to do.