The 18x70 mm motor size of common A, B, and C motors today came about because it was the same size tube used by the "Buzz Bomb Helicopter" firework made by Brown Manufacturing, which produced the initial rocket motors for Model Missiles Inc (MMI), the first rocket company. Convenience dictated the size. This was also true of the 29mm diameter used in many of today's mid power motors. Our hobby borrowed from the fireworks industry, a fact often overlooked in this more safety conscious time.

The first rocket motors were of one type, equivalent to an A4 in today's classification. Only way to get more power was to cluster. The familiar Estes BT-60 body tube used in the Big Bertha, Ranger, Mean Machine, and many other kits came about because it was realized that you could fit 3 18 mm motors in a paper tower tube. A "rocket version" of these tubes was quickly produced.

The Model Missile Association was established on December 7, 1957. It was a non-profit Colorado organization, and became the National Association of Rocketry at the end of 1958.

Model Missiles Inc produced the first mass-produced model rocket kit, the Aerobee Hi, in 1958. Vern Estes, founder of Estes Industries, got his start in rocketry by creating Mabel, the first rocket motor making machine. Mabel I (there were several Mabels) could produce a motor every 5.5 seconds. Estes made the motors for MMI, but he soon outpaced demand and created Estes Industries to sell the surplus motors. The first Estes kit, the Scout, came out in 1961.

NARAM 1, the first NAR rocket competition was held at the "Hogback Rocket Range" in Colorado on July 16 of 1959. Norman Mains, Jr. scored the most points and was the first national champion. NARAM 1 also featured the launch of a 7 engine cluster, "Honest Ivan" - a very impressive feat for back then. I love the cool launch towers they used (see image below) - I wish I had the skill to make one! 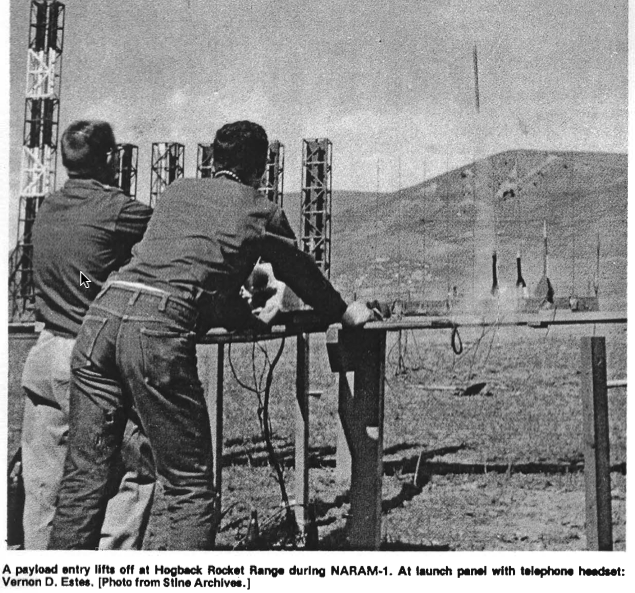 A few little known facts from the origin of the hobby...